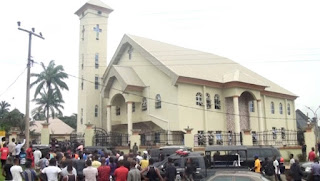 The suspects are: Prince Charles Obi a.k.a Gozila and Dickson Nwodi.

Umar disclosed this during a press briefing at Amawbia near Awka, and added that the duo, based in South Africa, are serving murder sentences in South African prison.

The News Agency of Nigeria (NAN) reports that 18 persons were killed by gunmen while 10 others were injured while they were attending early morning Sunday mass at the Church on Aug.6.

He said Obi and Nwodi who hailed from Nnobi and Oba communities of Anambra, had mandated one Quintus Anayo, also based in South Africa, to inform Ozubulu elders that they were behind the invasion.

The commissioner said that the account on Anayo was in line with the investigation of police into the matter.

He said that already police had established contact with Interpol on the need to extradite the suspects from South Africa to Nigeria.

He said that police in the state were already intensifying arrangements to arraign the three suspects earlier arrested in connection with the killings within the week.

Umar thanked the public for the information to which he attributed the successes already recorded by police in the investigations.

NAN reports that police and the State Government had blamed the invasion and killings on drug war.