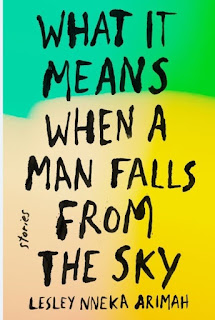 Lesley Nneka Arimah's debut collection of short stories, "What It Means When a Man Falls from the Sky," won the Kirkus Prize for fiction this week.

The prestigious literary prize comes with a $50,000 award.

Her collection features 12 stories which investigate the bonds of family, and weave together memory, war and Arimah's own brand of science fiction.

Arimah has lived in the Twin Cities since 2007. She was born in Nigeria and spent her teenage years in Louisiana. She later came to Minnesota for graduate school.

Her own family's history is a clear influence on the book, as she told MPR News host Kerri Miller. The collection's dedication reads: "For my father, thank you for telling me your stories."

Growing up, Arimah remembers the way her father kept things from her, like his experiences in Nigeria's civil war.

"I think he was trying to bury the stories, and I think that's something you see a lot in Nigerian families who went through the war. There's a culture of silence around it," Arimah said. "They want their children to live beyond it... but it's always a specter in your childhood."

Arimah remembers her father filling in the details as she grew older.

"My father has a bullet scar in his leg, from when his leg was almost taken off," she said. "It was hovering above our childhood — these experiences that our parents lived through."

That feeling of only getting part of the story, of only being let in on a piece of a memory, it parallels the way Arimah thinks about her own writing.

"There has to be a sense that the story started before it appeared on the page, and continues after it is done," she said. "I always write with that in they will continue to exist after. The stories have to have a sense of that breadth."mind. Yes, these characters are here on the page now, but they existed before I started writing, and
Book Review Nigeria Society
Reactions: