Before High-Level Discussions, US Aims To Strengthen Ties To Africa

on November 14, 2017
BY SALEM SOLOMON AND VINCENT MAKORI 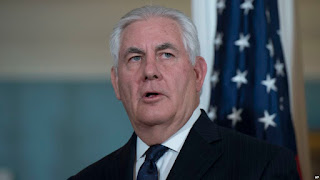 US Secretary of State Rex Tillerson

The event on November 16 and 17 will include discussions on trade and investment, counterterrorism, and good governance. In addition to the ministerial attendees, African Union Chairperson Moussa Faki Mahamat and other A.U. representatives will attend.

“If you look at the United States and our approach to not just Africa, but in the other regions of the world, it’s a much more multidimensional, very complex approach,” Yamamoto said. “It is not just only humanitarian assistance, but also developing capacity infrastructure, and also we’re looking at capacity building. In other words, we’re looking at how we can have sustainable economic growth.”

Yamamoto said the meeting will focus on preparing for the future. By the year 2100, Africa is projected to be the most-populous continent in the world with 2.2 billion people. About 70 percent of its population is under 30, and this “youth bulge” can either be a blessing or a curse, depending on how the continent prepares.

“What’s the potential for unemployment, and do we have enough job creation to meet those needs?” Yamamoto asked. “A stronger Africa means a stronger America and a stronger world.”

Africa unexpectedly came to the forefront of the Trump administration’s foreign policy last month with the killing of four Green Berets in a remote village in Niger. Following the attack, U.S. Sen. Lindsey Graham, R-South Carolina, said, “The war is headed to Africa. It’s beginning to morph. As we suppress the enemy in the Mideast, they are going to move.”

In the near term, the United States will continue to play a lead role in training African partner nations. U.S. forces have trained thousands of African soldiers in the past 10 years. Working with local partners, the United States has helped upgrade security and facilitate coordination across nations to guard against Boko Haram, Islamic State, drug trafficking and other threats, according to Yamamoto.

In the long term, however, security will come from economic growth and prosperity, Yamamoto said. To ensure this, the United States wants to discuss strategies for reducing debt and eliminating barriers to trade within the continent.

“If we break down non-tariff trade barriers and barriers that prevent trade from happening between the countries, then what we are going to see is not only expansion of investments in trade and opportunities, but also economic growth, and that could be the spark, the basis for other trade and development,” he said.
Africa News Desk Society United States
Reactions: