Baby Dies After Months In Hospital, Dad May Be In Nigeria 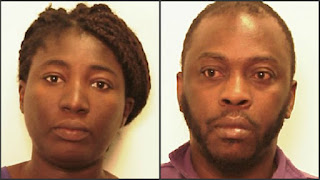 Arinola Olawusi (left) and Olalekan Olawusi (right) were arrested after their infant son was hospitalized with critical injuries. Image: WPRI via Providence Police

PROVIDENCE, R.I. (AP) – A baby who had been on life support since April, when his parents were arrested, has died and officials believe his father may have fled to Nigeria.

The baby was the subject of the newspaper's investigation into procedures the state uses to allow newborns to go home when a parent's competency is questioned.

His mother, Arinola Olawusi, pleaded not guilty to felony cruelty or child neglect.

The newspaper reports Tobi arrived at the hospital with broken bones, a fractured skull and a human bite mark.