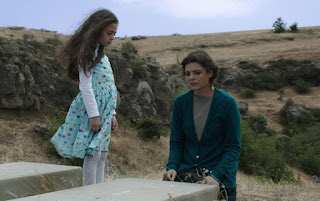 TEHRAN, IRAN (AP) — Armenia's foreign-language film submission to the Academy Awards for this year invites viewers to imagine a world without war, according to its director. Anahid Abad, the director of "Yeva," said at the Iranian premiere of her debut movie on Thursday, "The world without any war is much more beautiful, even for warmongers."

The film tells the story of a young woman who escapes her influential in-laws with her daughter, Nareh, after her husband's tragic death and takes refuge in a village in the Karabakh region. Criticizing war, Abad said its consequences are long lasting. "I was not directly in frontline of any war, but war was a part of my life," said Abad.

Abad has a long track record working in Iranian cinema as an assistant director. Her film is a joint production between the National Cinema Center of Armenia and the Iranian Farabi Cinema Foundation in Tehran, where the Iranian premiere was held.

The foundation also submitted Iran's foreign-language film entry to the Academy Awards for this year, another anti-war film by a female director, Narges Abyar's "Nafas (Breath)." Alireza Tabesh, the managing director of the foundation, told The Associated Press that both countries submitting anti-war films by female directors this year was "an invaluable coincidence".

"Launching co-production projects with countries in the region... is one of the main goals of this foundation", Tabesh said, "It offers the opportunity of entering into new markets and enables film producers to share their visions."

Iran has one of the largest Armenian communities in the world.
Genocide Iran Movies Society
Reactions: