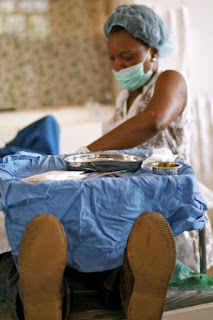 In a review of 60 publications, researchers found consistent evidence that male circumcision is associated with decreased risk in women for cervical cancer and sexually transmitted infections. Image Via Johns Hopkins University/JHPIEGO

Expanding access to voluntary medical male circumcision in sub-Saharan Africa may help protect women against not only HIV but other sexually transmitted infections, a literature review published Monday in The Lancet Global Health shows.

"Increasing access to high quality medical male circumcision services has been one of our most profound contributions to preventing the spread of HIV," said Kelly Curran, a study co-author from Jhpiego. "This study reminds us that those efforts can contribute to positive health outcomes for others well beyond our immediate beneficiaries."

Voluntary medical male circumcision, or VMMC—an effective HIV prevention approach being scaled up across Eastern and Southern Africa in accordance with guidance from the World Health Organization and UNAIDS—has been shown to reduce men's risk of heterosexually-acquiring HIV and some other sexually transmitted infections. Nearly 15 million adult and adolescent males chose to have the procedure between 2007 and 2016, with the majority of these procedures supported by the U.S. President's Emergency Plan for AIDS Relief and local ministries of health and defense.

While past studies have shown that the intervention helps decrease women's risk for HIV and cervical cancer, it has not been clear how this male-focused strategy impacts women's health. This new consolidation of evidence suggests that VMMC may have beneficial effects for women beyond HIV in some of the highest-priority diseases in global women's health.

"These findings confirm that voluntary medical male circumcision is associated with protection for female partners from diseases that severely impact their health," said the study's first author, Jonathan Grund, from the CDC's Division of Global HIV & TB. "Existing prenatal care services and cervical cancer screening programs already counsel women about staying healthy. If that counseling includes encouraging male partners to get circumcised and referring interested men to these services, it can improve women's health programs and HIV prevention programs simultaneously."

A next step would be confirming that these findings are also seen in the existing international circumcision program over time, and monitoring their impact. The article's authors recommend that strengthening linkages and cooperation between VMMC and women's health programs be explored, to ensure that the benefits of male circumcision for women's health are fully optimized.
News Desk Saban Research Society World View
Reactions: