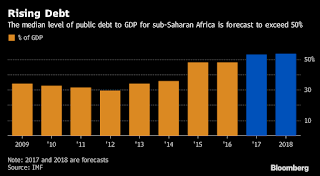 AFRICA (BLOOMBERG) -- The median level of government debt in sub-Saharan Africa will probably rise to more than 50 percent of gross domestic product this year, increasing strain on the financial sector and limiting much-needed stimulation for growth, the International Monetary Fund said.

Public debt will increase from a median level of 34 percent of GDP in 2013, the Washington-based lender said in its Regional Economic Outlook released Monday. Government liabilities increased in all but four countries in the region since 2013, driven by slow economic growth, a slump in commodity prices, widening fiscal deficits, and in some cases, sharp exchange-rate depreciation, according to the IMF.

Slowing growth last year put pressure on government revenues on the continent, while countries that are heavily reliant on commodity exports saw dollar inflows shrink. Expansion in the region may quicken to 2.6 percent in 2017 from 2016’s 22-year low of 1.4 percent, according to the lender’s report. The economies of South Africa and Nigeria, which together account for about half of the region’s GDP, will still grow at less than 1 percent.

“The debt sustainability outlook has worsened considerably since 2013,” the IMF said. “The number of low-income countries in debt distress or facing a high risk of debt distress increased from seven in 2013 to 12 in 2016. Consistent with the broader trend of
credit downgrades in emerging markets, several sub-Saharan African frontier markets or other countries with sovereign-credit ratings have been downgraded.”

At the end of August, Namibia was the only country in the region whose debt Fitch Ratings Ltd. still assessed as investment grade.

Dollar-denominated bond issuance from the region’s markets was about $4.6 billion in the first half of this year compared with $750 million for the whole of 2016, the IMF’s Africa Department Director Abebe Selassie said by phone before the release of the report.

“High levels of public debt can be quite harmful,” he said. “The debt-servicing cost can be a major source of drain of resources that could otherwise be used.”
Africa News Desk Nigeria Society South Africa
Reactions: