US Officials: Confrontation With North Korea Not Imminent 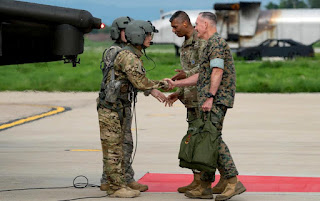 WASHINGTON (AP, AUGUST 13, 2017) — Senior U.S. national security officials say a military confrontation with North Korea's isn't imminent. But they're also saying that the possibility of war with the reclusive Asian nation is greater than it was a decade ago.

CIA Director Mike Pompeo (pahm-PAY'-oh) says there's "nothing imminent today." But Pompeo says on "Fox News Sunday" that North Korea's push to develop a nuclear-tipped ballistic missile capable of hitting the United States "is a very serious threat and the administration is going to treat it as such."

President Donald Trump's national security adviser, H.R. McMaster, tells ABC's "This Week" that "we're not closer to war than a week ago, but we are closer to war than we were a decade ago."
News Desk North Korea Society The Associated Press United States
Reactions: