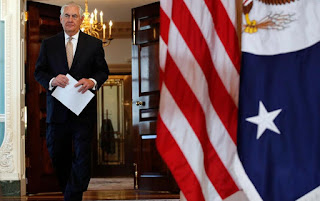 Secretary of State Rex Tillerson walks to speaks at a news conference about Qatar at the State Department in Washington, Friday June 9, 2017. Tillerson is calling on Saudi Arabia, Egypt, the United Arab Emirates and Bahrain to immediately ease their blockade on Qatar.

WASHINGTON (AP, JUNE 9, 2017) — The Latest on the U.S. response to the Arab blockade of Qatar (all times local): 3:15 p.m. President Donald Trump is accusing Qatar of funding terrorism at a "very high level" and says it must stop now.

Trump says the country, which hosts roughly 10,000 U.S. troops and serves as a major staging base, has "historically been a funder of terrorism at a very high level" He says that funding has to end. Qatar has long denied supporting or funding terror groups. But Western diplomats accuse the country of allowing or even encouraging the funding of some Sunni extremists.

Trump's comments came shortly after Trump's Secretary of State Rex Tillerson called on Arab nations to immediately ease their blockade on Qatar. He warned that the Persian Gulf crisis is hindering U.S. efforts to fight the Islamic State group.

Saudi Arabia and other nations cut off diplomatic relations with Qatar earlier this week.

Secretary of State Rex Tillerson is calling on Saudi Arabia, Egypt, the United Arab Emirates and Bahrain to immediately ease their blockade on Qatar.