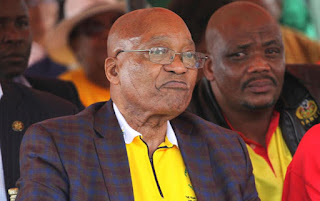 South African President Jacob Zuma attends a May Day rally in Bloemfontein, South Africa, where he was jeered by labor unionists. The Constitutional Court ruled Thursday, June 22, 2017, in Johannesburg, that a parliamentary vote of no confidence in Zuma could be by secret ballot, saying it is up to the speaker of parliament to decide.

JOHANNESBURG (AP, JUNE 22, 2017) — South Africa's highest court says it is up to the speaker of parliament to decide whether a vote of no confidence in President Jacob Zuma can be done by secret ballot. Opposition parties had wanted a secret ballot in the belief that disgruntled lawmakers in the ruling party could turn against Zuma if their votes are not publicly disclosed and they have less fear of reprisals from their own party.

However, the Constitutional Court ruled Thursday that parliamentary speaker Baleka Mbete, a ruling African National Congress member and Zuma ally, can decide on a secret vote. The court says the constitution is "silent" on the matter.

Zuma has faced calls for his resignation even from within the ruling party because of scandals involving alleged corruption and mismanagement.
Africa AP Society South Africa
Reactions: