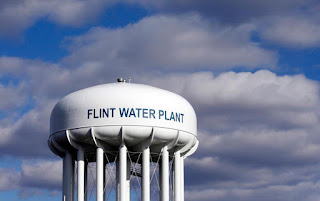 The Flint Water Plant water tower is seen in Flint, Mich. The U.S. Environmental Protection Agency said on March 27, 2017, that a $100 million grant to address drinking water issues in the city was approved after a formal application from Michigan state officials.

WASHINGTON (AP) — President Donald Trump and former President Barack Obama had a hand in last week's grant of $100 million to address the lead in the drinking water crisis in Flint, Michigan, despite a report that seeks to give Trump credit for the funding. The report also says Obama refused to give money to Flint, which is false.

The federal Environmental Protection Agency, which is part of the executive branch of government led by the president, announced last week that it had granted $100 million to the state of Michigan to fund drinking water infrastructure upgrades in Flint. The EPA said in its announcement that the funding was provided by the Water Infrastructure Improvements for the Nation Act of 2016, a measure passed by Congress and signed into law by Obama in December.

The law provides a total $170 million to address drinking water safety issues. Part of the money is set to go to new pipes for Flint, where residents have struggled with lead-tainted water for nearly three years.

The $100 million grant was awarded earlier this month after the EPA reviewed and approved a formal request from state officials, the EPA said. A story by the right-wing partisan website The Red Elephants is headlined, "Trump's EPA sending $100 million to Flint to fix water - something Obama refused to do." Another from the Conservative Tribune reads: "First Real Hope for Flint Water as Trump Bestows $100 Million." Obama pledged $80 million in funding to Michigan to address drinking water issues during a visit to the state in January 2016.