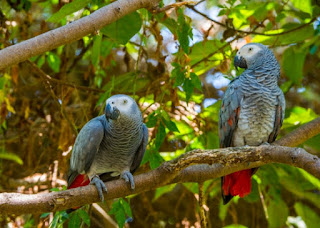 The global trade in wild African grey parrots has been banned after an agreement forged by countries meeting in Johannesburg for a United Nations endangered wildlife conference.

The birds are the third most traded in the world and make popular pets in Britain and elsewhere because of their ability to mimic speech, their intelligence and longevity.

But the capturing of an estimated fifth of their numbers in the central and west African nations to which they are native has meant that now it is extremely rare to see them in the wild.

The International Fund for Animal Welfare (IFAW) estimates that between 2.1 and 3.2 million African greys were captured between 1975 and 2013. Around two thirds of their number die as they are shipped to market in “deplorable” conditions, it claims.

The parrots were first listed for limited trade under a Cites quota system in 1981 but destruction of their habitat, illegal poaching and inefficient and sometimes corrupt regulation of sales has seen their numbers decline by between 50 and 90 per cent in 14 of 18 states where the birds range.

Their monogamy and low reproductive rate has also been blamed for their demise.

The proposal for them to be listed under Cites Appendix I, which prohibits all international trade, was submitted by five range states, Gabon, Nigeria, Guinea-Bissau, Angola and Togo, with co-sponsorship by Chad, Senegal, USA and EU. It was agreed by 95 votes in support, 35 votes against and five abstentions.

Dr Colman O Criodain, the World Wildlife’s Fund’s global policy manager, hailed the ban as a “huge step forward” for the much-loved, and beleaguered, species but said for their numbers to rise, illegal traffickers had to be targeted more fiercely.

“Fraud and corruption have enabled traffickers to vastly exceed current quotas and continue to harvest unsustainable numbers of African grey parrots from Congo’s forests to feed the illegal trade,” he said. “Banning the trade will make it easier for law enforcement agencies to crack down on the poachers and smugglers, and give the remaining wild populations some much-needed breathing space.”

The largest gathering in Cites’ 43-year history has also banned the trade in pangolins, a scaly ant-eater, and will in the coming days consider proposals to lift the ban on the elephant ivory and rhino horn trade, more tightly regulate lion hunting and trophy exporting and safeguard dwindling shark populations.
Africa Culture News Desk Society
Reactions: