on June 11, 2016
BY CHIDO OKAFOR AND JULIUS OSAHON
THE GUARDIAN, NIGERIA 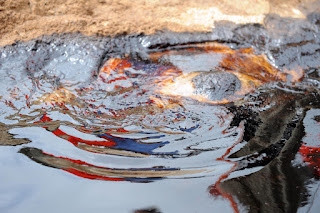 Spilled crude oil floats on the shores of swamps in Bodo, in the Niger Delta, Nigeria, June 24, 2010. Militants in the oil-producing region have threatened secession from Nigeria. Image: Pius Utomi/AFP/Getty

(NIGERIA) -- The Niger Delta Avengers (NDA) yesterday said it wants to sell crude oil directly to countries and urged such countries not to buy crude oil again from Nigeria, saying the region producing the oil was being neglected.
The militant group, which rejected overtures from the federal government for dialogue, with a view to ending the destruction of pipelines, blamed government for the attack through its Twitter handle.
Less than 24 hours after it blew up two major oil wells in Dibi, Warri, Delta State, the group yesterday morning bombed yet another crude oil pipeline in Obi Obi Brass Trunkline belonging to Agip/ENI in Bayelsa State around 3:00am, which sparked fire and sent thick smoke into the atmosphere.
The Avengers had previously warned Agip not to repair a pipeline in Bayelsa State, which it had earlier bombed.
The latest attack, which was described as massive, was said to have been carried out in spite of the heavy presence of the military and their gunboats in Brass Council, which also hosts the multi-million-naira Nigeria Liquefied Natural Gas (NLNG) project.
The attack also came despite measures put up by security outfits in charge of safeguarding oil facilities in the region, following intelligence report that the state would be the group's next port of call.
News Desk Niger Delta Avengers Nigeria Oil Oil Pipelines Politics Society The Guardian
Reactions: