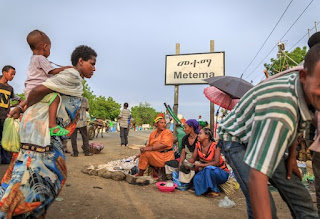 Women sell foodstuffs by the side of a street in Metema, in northwestern Ethiopia next to the border with Sudan. The town is a center for a booming trade in migrants from Ethiopia, Eritrea, Somalia and Sudan, with many hoping to make their way to Europe, but life here is now a cat-and-mouse game: The authorities are cracking down, yet the migrants just keep coming, often risking death. (AP)