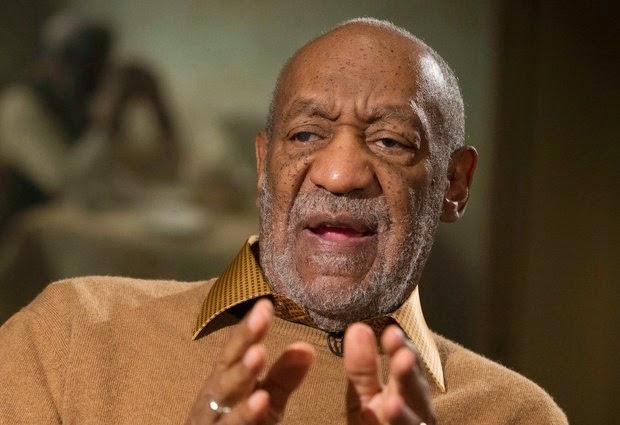 Entertainer Bill Cosby gestures during an interview about the upcoming exhibit, "Conversations: African and African-American Artworks in Dialogue, " at the Smithsonian's National Museum of African Art.

LOS ANGELES (AP) — A lawsuit by a woman who claims Bill Cosby molested her when she was 15 years old has moved allegations of sexual misconduct against the comedian from the court of public opinion into the courthouse.
Judy Huth's lawsuit filed Tuesday in Los Angeles accuses Cosby of forcing her to perform a sex act on him in a bedroom of the Playboy Mansion around 1974. She is the latest woman to accuse the comedian of sex abuse, and is the first one since 2005 to file a lawsuit.
Cosby has been beset for weeks by allegations by more than a dozen women that he drugged and sexually assaulted them in incidents spanning several decades. The comedian has not been criminally charged and many of the claims are so old, they are barred by statutes of limitations.
Huth's lawsuit, however, contends that she became aware of the serious effect the abuse had on her within the past three years. California law allows victims of sex abuse when they were minors to bring a claim after adulthood if they discover later in life that they suffered psychological injuries as a result of the abuse.
Cosby has not been criminally charged, but Netflix and NBC have scuttled projects featuring the comedian and several shows on his comedy tour have also been canceled. His attorney Martin Singer did not return an email message seeking comment Tuesday night.
Huth's sexual battery and infliction of emotional distress lawsuit states that she and a 16-year-old friend first met Cosby at a Los Angeles-area film shoot and the comedian gave the girls drinks a week later at a tennis club.
The lawsuit states that Cosby took them to the Playboy Mansion after several drinks, and told the teenagers to lie and say they were 19 years old if asked. Her lawsuit states Cosby forced her to perform a sex act on him with her hand.
"This traumatic incident, at such a tender age, has caused psychological damage and mental anguish for (Huth) that has caused significant problems throughout her life," the lawsuit states. Huth's lawsuit filed in Los Angeles Superior Court is the first time a woman has gone public claiming Cosby abused her when she was underage. A second woman told Pittsburgh television station KDKA last month that Cosby drugged her to the point of unconsciousness in the 1980s when she was 15.
The suit does not specify how much Huth is seeking from Cosby. Singer has denied previous accusations or said the women raising the claims in interviews had been discredited. Singer's statement does not apply to a lawsuit brought in 2005 by Andrea Constand, who claimed Cosby drugged and molested her at his suburban Philadelphia mansion in 2004. Constand, who worked for the women's basketball team at Temple University, and Cosby settled the case before trial.
Cosby resigned from the university's board of trustees on Monday. He had been the school's public face, appearing in advertisements, fundraising campaigns and delivering commencement speeches.
Anthony McCartney can be reached at http://twitter.com/mccartneyAP
Associated Press Los Angeles Newsroom Society
Reactions: