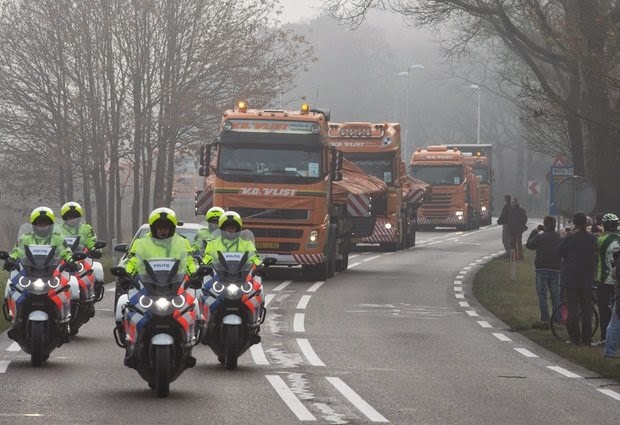 People line the road as trucks carrying parts of the wreckage of downed Malaysia Airlines flight MH17 arrive from the Ukraine at Gilze-Rijen military base, Netherlands, Tuesday, Dec. 9, 2014.

AMSTERDAM (AP) — The Dutch government has rejected a call for it to hand the investigation of the Malaysia Airlines Flight 17 disaster over to the United Nations, saying it is doing the best it can under difficult circumstances.
Flight 17 was shot down over territory held by pro-Russia rebels in eastern Ukraine on July 17, killing 298 people. Parts of the wreckage arrived in the Netherlands Tuesday by truck as part of the Dutch-led investigation into the cause.
In a letter to the founder of a law firm representing several victims' families, the government's top security official said investigators are facing a "complex geopolitical situation in a conflict zone" and are doing what they can.
In an interview with AP Tuesday, firm spokesman Bob van der Goen criticized the investigation's pace.
Associated Press Newsroom Ukraine
Reactions: