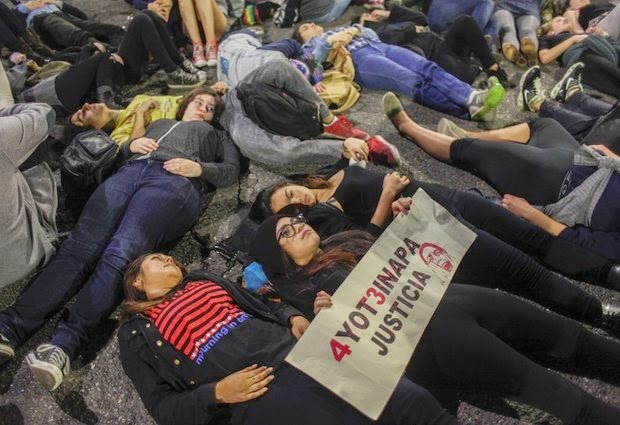 Demonstrators lie in the street in Berkeley, California on Saturday, Dec. 6, 2014. Two officers were injured Saturday night as a California protest over police killings turned violent with protesters smashing windows

BERKELEY, CALIF. (AP) — Two officers were injured as a California protest over police killings turned violent with protesters smashing windows and throwing rocks and bricks at police, who responded by firing tear gas, authorities said.
Several officers were struck, but there were just two reports of injury, Berkeley police spokeswoman Jenn Coats said. A Berkeley police officer received hospital treatment for a dislocated shoulder after being hit with a sandbag, while another sustained minor injuries.
Saturday night's demonstration against police killings of unarmed black men in Missouri and New York began peacefully, the latest of several in the Bay Area in recent days. But Officer Coats said that some protesters later broke away and began throwing rocks, bottles and pipes at officers.
Scores of law officers from several surrounding agencies joined Berkeley Police Department in trying to quell unrest that went on for hours, into early Sunday morning. She said several businesses on University Avenue were vandalized, including Trader Joe's, Radio Shack and a Wells Fargo Bank branch. Some squad cars were also damaged.
"A small splinter group from the original protests continues to march in Berkeley," Coats said in a statement issued around 11 p.m. PST. "Unfortunately this group has become violent and continues to throw objects, including rocks and bricks at officers."
She said officers attempting to get the crowd to depart used tear gas. " Several dispersal orders have been given, and the crowd has ignored the orders. In response to the violence officers have utilized tear gas and smoke in an effort to disperse the crowd," she said.
Some people were still protesting in the streets early Sunday morning, police said. Authorities did not provide further details of any injuries or arrests. "The total number of arrests and injuries is not known at this time," Coats' statement said.
Local media reports said about 300 to 400 people participated in the relatively peaceful demonstration before splinter groups broke off. The San Francisco Chronicle reported that at one point, the marchers were face-to-face with a line of about 100 police in riot gear who turned the crowd back.
The paper said that it wasn't just protesters who were hit by tear gas. Several concerts had let out from downtown sites and concertgoers waiting to pay in a nearby garage were enveloped in a cloud of stinging gas, sending them running into elevators.
KCBS reported that police closed two Bay Area Rapid Transit commuter train stations along the protest route. Protesters had planned to march from the University of California, Berkeley campus to Oakland's Civic Center.
Associated Press California New York Newsroom Society UC Berkeley
Reactions: