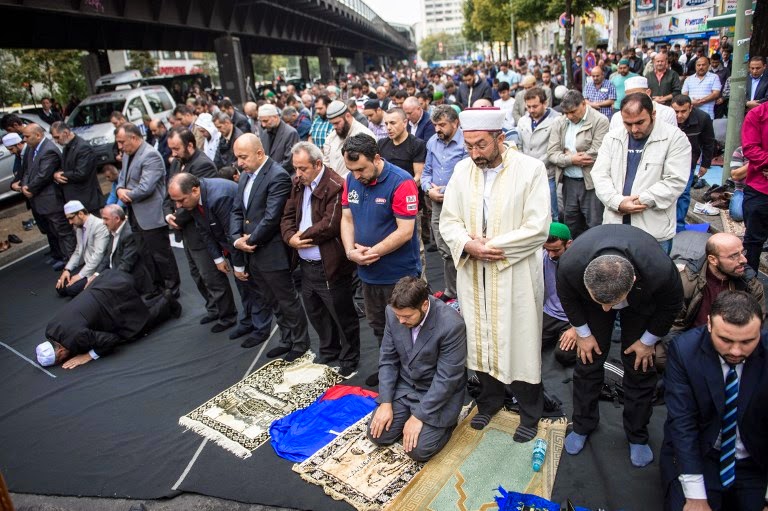 Muslims take part in Friday prayers in Berlin on September 19, 2014 as part of the nationwide event “Muslims against hatred and injustice”. Maja Hitij/DPA/AFP

BERLIN , GERMANY (AFP) – Muslims across Germany held a day of prayer and rallies Friday to condemn both religious extremism and a backlash against Islam that has seen arson attacks on mosques.
Some 2,000 mosques joined the event “Muslims against hatred and injustice” organised by Germany’s four main Islamic groups, together with government ministers, lawmakers, Christian and Jewish leaders and city mayors.
In Berlin, thousands of faithful knelt on prayer mats under the open sky in the inner-city Turkish and Arabic community hub of Kreuzberg, before listening to speeches in favour of tolerance and against violent extremism.
“We are seeing how people in the name of Allah commit atrocities, torture others, drive them from their homes and murder them,” said a statement read out in mosques across Germany.
“They are acting under the banner of the Prophet, but their crimes show that they have not understood a word of what Allah has revealed to us and how our Prophet lived by these commandments.”
The Coordination Council of Muslims, which released the speech, also bemoaned a backlash against their religion in Germany, sparked by conflicts in the Middle East.
“We are seeing our mosques in Germany being attacked and set on fire,” said the speech, which said there had been 80 incidents targeting Muslim houses of worship since 2012.
Muslim communities in Germany were “worried and unsettled about being increasingly marginalised as Muslims and treated with hostility.”
“Unite against hate”
The prayers follow a rally against anti-Semitism in Berlin last Sunday in which Jewish leaders and German politicians led by Chancellor Angela Merkel condemned a recent spate of slurs and attacks against Jews.
Tempers flared at a series of pro-Palestinian demonstrations during Israel’s assault on Gaza, as some protesters chanted that Jews should be “gassed” and “slaughtered”.
Ali Kizilkaya, spokesman of the Coordination Council of Muslims, said: “We must stand united as a society when there are hate crimes, whether against churches, mosques, synagogues or other places of worship.”
Interior Minister Thomas de Maiziere praised the Muslim peace rallies as a “magnificent campaign” in a joint interview with German newspaper Die Welt and the Turkish daily Hurriyet.
Vigils and peace rallies were held after the traditional Friday noon prayers in German cities also including Hamburg, Frankfurt and Stuttgart.
Justice Minister Heiko Maas said a “very clear dividing line” had to be drawn “between the vast majority of Muslims who live peacefully with us and those who misuse Islam to commit injustice”.
German security services say some 400 German citizens have joined extremist groups in Syria and Iraq, of whom about 130 have since come home, while German nationals have also fought with Somalia’s al-Qaeda-linked Shebab.
This month the appearance of self-styled “Sharia police” vigilantes in the western city of Wuppertal sparked outrage in Germany.
Aiman Mazyek, chairman of the Central Council of Muslims, earlier also said Germany’s Muslims wanted to take a clear stand against extremists fighting in Iraq and Syria, and other extremist movements.
“These are terrorists and murderers who drag Islam into the dirt and bring hatred and suffering to the people, including to their own fellow Muslims, in Syria, in Iraq and elsewhere,” he wrote in the top-selling Bild newspaper.
“We want to make clear that the majority of Muslims in this country and around the world think and act differently. Islam is a peaceful religion.”
AFP Africa France News News Desk
Reactions: