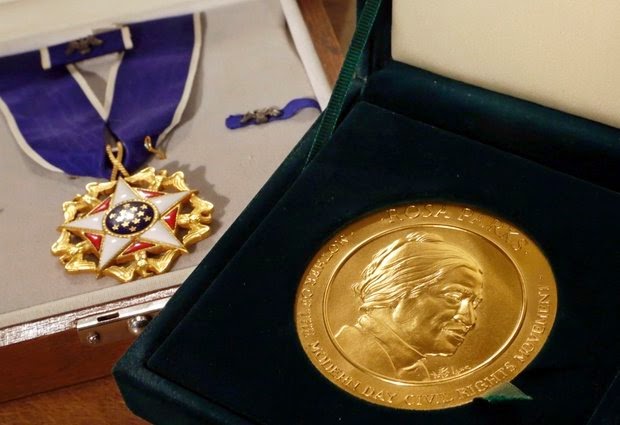 Rosa Parks' Presidential Medal of Freedom, left, and her Congressional Gold Medal are displayed at Guernsey's auction house, in New York. Hundreds of items from the civil rights figure Rosa Parks that were long kept hidden away in a warehouse will have a new home at the Library of Congress for the next 10 years.


WASHINGTON (AP) — Hundreds of items from civil rights icon Rosa Parks that were long kept hidden away in a New York warehouse will have a new home at the Library of Congress for the next 10 years.
Library officials announced Tuesday night that Howard Buffett, the son of billionaire investor Warren Buffett, is loaning the entire collection to the world's largest library. Buffett's foundation bought the archive last month.
The collection includes about 1,500 items, including Parks' personal correspondence and photographs, clothing, furniture, letters from presidents and her Presidential Medal of Freedom and Congressional Gold Medal.
After the archive was sold, Buffett told The Associated Press he planned to give the items to an institution or museum. He declined to say how much he paid for the collection but said the items belong to the American people.
"My goal was always to ensure this historic collection would be made available for the public's benefit so that as many people as possible can learn about Rosa Parks and the sacrifices she made to support the civil rights movement," Buffett said in a statement Tuesday.
Parks became a pivotal symbol of the civil rights movement when she refused to give up her seat to a white man on a bus in Montgomery, Alabama. A yearlong bus boycott followed that helped raise the profile of the Rev. Martin Luther King Jr.
Parks died in 2005 at age 92. After a yearslong legal fight between Parks' heirs and her friends, her memorabilia was removed from her Detroit home and offered to the highest bidder. Some of Parks' items will be incorporated into a new exhibit in spring 2015 about the Civil Rights Act of 1964, the library said. Documents and items from the collection also will be digitized to be made available online.
The Rosa Parks collection will join notable civil rights materials held at the library, including the papers of Thurgood Marshall, A. Philip Randolph, Bayard Rustin and the records of the NAACP and National Urban League.
"Rosa Parks is an iconic figure in the American civil rights movement, the very definition of the quiet power of an individual to inspire action in others," said Librarian of Congress James Billington.
Follow Brett Zongker on Twitter at https://twitter.com/DCArtBeat
Associated Press News Desk Rosa Parks United States
Reactions: