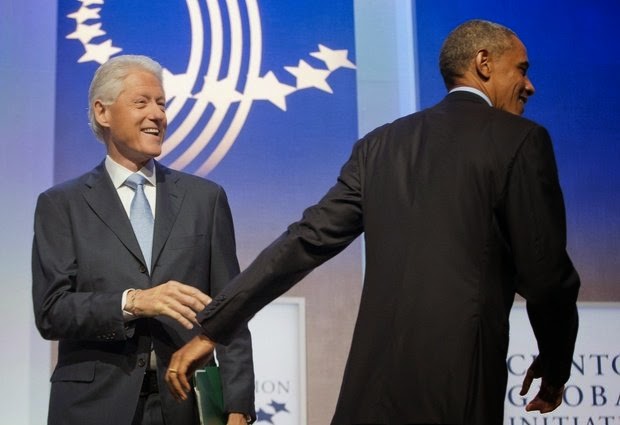 President Barack Obama is greeted by former President Bill Clinton at the Clinton Global Initiative in New York, Tuesday, Sept. 23, 2014. Obama is in New York for three days of talks with foreign leaders.


NEW YORK (AP) — Ordinary citizens will often have a more lasting impact on their community than their presidents and prime ministers, President Barack Obama said Tuesday as he promoted civil society at the annual Clinton Global Initiative in New York.

Obama said when people are free to speak their mind and hold leaders accountable, their governments work better and are more responsive. He praised groups that work to promote the rights of women, minorities, laborers, gays and lesbians.


Former President Bill Clinton greeted Obama onstage with a hearty handshake and a few jokes. Obama said picking Hillary Rodham Clinton to be his secretary of state was one of his best decisions as president. He said now that she's left government she has "that post-administration glow."
Obama attended the annual Clinton confab on the sidelines of the U.N. General Assembly meetings, which have been given new urgency this year by an array of crises facing the international community. At a fundraiser for Senate Democrats later Tuesday, Obama reflected on the instability that's taken hold from Russia and Ukraine to Syria and Iraq.
"We've gone through extraordinary challenges over the last decade," Obama told donors in a chic Upper West Side apartment overlooking the Hudson River. "The good news is this week, what you're seeing is what American leadership means."
Associated Press Barack Obama Bill Clinton New York News Desk United States
Reactions: