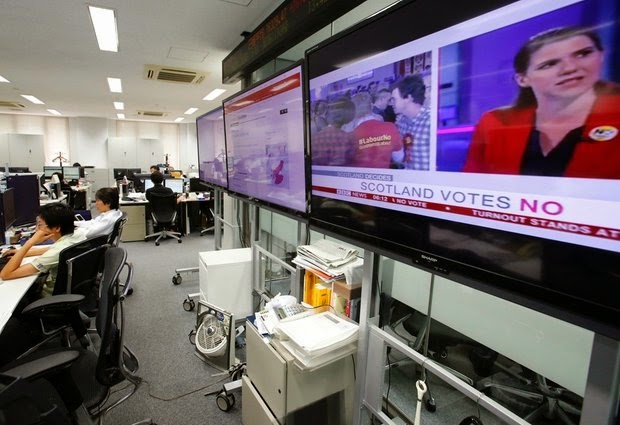 Screens show Scotland's referendum results as money traders work at a foreign exchange dealing company in Tokyo, Friday, Sept. 19, 2014. The British pound jumped as Scotland voted to stay part of the United Kingdom while Japanese shares surged as the yen extended losses against the dollar.


NEW YORK (AP) — With Wall Street focused on the debut of Alibaba Group, the stock market drifted into the weekend and major indexes ended little changed.
Investors watched as the Chinese e-commerce giant surged 38 percent Friday, in its first day of trading on the New York Stock Exchange. Alibaba gained $25.89 to end at $93.89. By the end of the day, the Standard & Poor's 500 index fell less than a point, a sliver of a percent, to 2,010.40. It finished with its best weekly gain in a month.
Alibaba lined up its initial public offering of stock at $68 a share the day before, raising $21.8 billion from investors. That vaulted Alibaba to the top tier of technology companies in terms of market value. It's bigger than Amazon.com but smaller than the titans of tech, Apple and Google.
"We know there's a lot of demand from institutional and retail investors, so it's not a surprise to see it rally that quickly," said JJ Kinahan, chief strategist at TD Ameritrade, the online brokerage.
Alibaba was the big story Friday, but the rest of the week belonged to the Federal Reserve. At the end of a two-day meeting on Wednesday, the Fed issued a statement saying that it planned to keep its benchmark lending rate low. Some investors had earlier voiced concerns that the Fed might be in a bigger hurry to hike rates.
"Janet Yellen (the Fed's chairwoman) told people exactly what they wanted to hear," Kinahan said. Encouraged, investors sent stocks to record highs this week. The S&P 500 index has now climbed 9 percent in 2014, better than the average gain for a full year.
In other trading Friday, the Dow Jones industrial average edged up 13.75 points, or 0.1 percent, to close at 17,279.74. The Nasdaq composite fell 13.64 points, or 0.3 percent, to 4,579.79. German business-software company SAP announced plans to buy Concur Technologies for $7.4 billion. Concur's stock jumped $19.02, or 18 percent, to $126.82.
Oracle's stock slumped after the announcement late Thursday that Larry Ellison, the tech company's billionaire founder, is stepping down as CEO after 37 years. Ellison remains the company's biggest shareholder. Oracle's stock fell $1.75, or 4 percent, to $39.80.
The yield on the 10-year Treasury note fell to 2.58 percent, from 2.62 percent late Thursday. Britain's main index rose slightly after voters in Scotland rejected a referendum to break from the U.K. Some warned that if Scotland left, uncertainty over the future value of the British pound and government debt would have shaken the U.K economy.
Britain's FTSE 100 advanced 0.3 percent. France's CAC 40 slipped 0.1 percent, and Germany's DAX was flat. Elsewhere, Japan's Nikkei 225 jumped 1.6 percent as the yen's weakness gave a boost to companies that rely on exports.
In commodities trading, precious and industrial metals fell, extending their losses for the week. Gold dropped $10.30 to settle at $1,216.60 an ounce. Silver sank 67 cents to $17.84 an ounce. Copper was unchanged at $3.09 a pound.
Oil fell 66 cents to $92.41 a barrel as the dollar gained strength. Oil trades in dollars, so a stronger dollar makes oil more expensive to traders holding other currencies. Brent crude, a benchmark for international oils imported by many U.S. refineries, rose 69 cents, to $98.39 a barrel in London.
In other futures trading on the New York Mercantile Exchange: — Wholesale gasoline rose 5 cents to $2.611 a gallon — Heating oil was flat at $2.717 a gallon — Natural gas fell 7.3 cents to $3.837 per 1,000 cubic feet
AB Business Writer Kelvin Chan contributed from Hong Kong
Associated Press China England New York News Desk
Reactions: