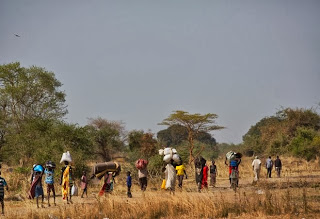 Displaced people walk to find an unoccupied patch of ground where they can rest after arriving by river barge from Bor, some of the thousands who fled the recent fighting between government and rebel forces in Bor by boat across the White Nile, in the town of Awerial, South Sudan.


ADDIS ABABA, ETHIOPIA (ASSOCIATED PRESS) — Peace talks between warring parties in South Sudan scheduled to be held in Ethiopia were delayed Saturday because the sides haven't yet agreed upon an agenda, officials said.

Officials had hoped direct peace talks would begin Saturday after preliminary discussions on Friday. "You need to stop this senseless war today," Adhanom told the warring factions. The slow start to peace talks is a worrying sign for South Sudan, which has seen spiraling, ethnic-based violence the last three weeks.

President Salva Kiir accuses the former vice president, Riek Machar, of an attempted coup. Machar denies the accusation, but forces loyal to him now control two state capitals, including the town of Bor, about 120 kilometers (70 miles) north of the country capital, Juba.

A spokesman for Machar, Yohanis Musa Pouk, said that peace talks won't be held unless a clear agenda is set first. Pouk said preliminary talks Friday were good, but he couldn't predict when more advanced talks would begin.

The U.N.'s top humanitarian official in South Sudan, Toby Lanzer, said Saturday that people are continuing to arrive in search of a safe haven at two U.N. bases in South Sudan's capital. The U.N. is hosting 30,000 refugees in Juba alone, he said. Some 200,000 people are believed to have been displaced by the three weeks of violence.

The largest humanitarian needs are in Awerial, where an estimated 76,000 people have fled violence in the nearby town of Bor, where indiscriminate violence left bodies lying in the street, according to refugee witnesses.

The U.N. mission in South Sudan said Saturday that it's reinforcing its presence in the country, including police, military and logistics support. Shortly after the violence broke out Dec. 15 the U.N. Security Council voted to temporarily increase the number of U.N. military personnel in South Sudan from 7,000 to 12,500.

The response to the humanitarian crisis has been complicated by the fact the U.N., aid agencies and embassies have sent personnel out of the country because of the risk of violence. The U.S. Embassy on Friday announced it was evacuating more personnel out of an abundance of caution.
Associated Press News Desk Southern Sudan Sudan
Reactions: