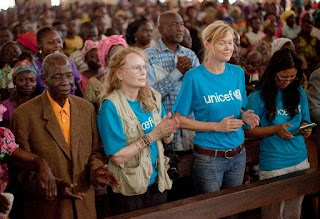 US actress and Goodwill ambassador for UNICEF Mia Farrow (2ndL) takes part in a mass at the Bossangoa cathedral on November 10, 2013

"CAR is not a forgotten crisis. The population is simply completely abandoned," said Farrow, who is a goodwill ambassador for the UN children's agency UNICEF.

Farrow, 68, recently back from a visit to the conflict-ravaged nation, told reporters the "seeds of genocide" had been sown there and the world had a moral duty to take a stand.

The Central African Republic has been plagued by instability since a coup by Seleka, a coalition of rebel groups which overthrew longtime president Francois Bozize in March.

He officially dissolved the rebel movement but its members have continued to stage attacks and robberies. Armed gangs, mainly former Seleka loyalists, now dominate outside the capital Bangui.

Rival self-defence militias are battling the armed gangs in many towns, clashing with the mainly Muslim ex-rebels in the 80-percent Christian country.

Ten percent of the population of five million in the poor, landlocked country have been displaced by violence, according to the UN.

Many have fled to the bush to avoid attacks in the country's towns and villages.

In addition, according to UNICEF, some 3,500 children have been drawn into various armed groups.
Farrow dubbed the Central African Republic a "failed state" and said the authorities there were "completely useless".

African nations have deployed some 2,500 troops in the country which is due to increase to 4,500, but diplomats and many officials say it cannot cope with the anarchy and that UN peacekeepers may be needed.
UNICEF has launched an appeal for $32 million (24 million euros) to fund aid in the Central African Republic, but has so far mustered only $12 million.

Farrow has been a UNICEF goodwill ambassador since 2000, and has already carried out missions to Angola, the Democratic Republic of Congo, Cameroon, Chad, Guinea, Haiti, Lebanon, Nigeria, Uganda and Sudan.
Africa Congo News Desk
Reactions: 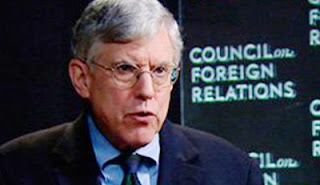