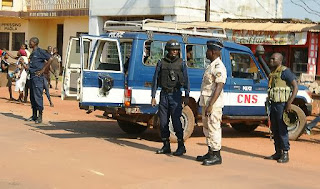 Bangui (Central African Republic) — The foreign minister of the Central African Republic on Saturday rejected international warnings that his impoverished, strife-torn country could be headed for genocide.
World alarm has grown over the violence wracking the mineral-rich country since a March coup, with the United Nations, the United States and former colonial ruler France all recently cautioning the situation could degenerate into genocide.
But Foreign Minister Leonie Banga Bothy told local radio that the statements were not helping the situation in the country and could have a perverse effect.
"We can't speak of a genocide of an ethnic or social group," he said.
"Such statements on an international level can lead people to believe there is an imminent danger and to arm themselves to prepare for this genocide. And that is not what we want.
"The security situation is worrying in certain regions of our country and in several areas of the capital. But a lot of bold and positive measures have been taken. And we hope that in the face of some of the results, we will be able to stabilise the situation in our country.
"To speak of pre-genocide or of genocide, I think this will have perverse effects on the population, which has already suffered a great deal and which at the moment does not need any additional paranoia."
The sprawling country of five million people with a history of coups and rebellions has been beset by strife since the Seleka rebel coalition ousted president Francois Bozize in March and put the country's first Muslim leader, President Michel Djotodia, in power in the mostly-Christian country.
The transitional government has little control over the rest of the country where armed groups -- the remnants of successive rebellions, mutinies and insurgencies -- hold sway over a people facing atrocities, food shortages and the collapse of health care.
In parts of the country, fighting has broken out between mainly Muslim former rebels who seized power in March and militia groups set up to protect Christian communities, which make up about 80 percent of the population. Both churches and mosques have been razed to the ground.
In Bangui, killings have been blamed on ex-rebels of the Seleka coalition led by Djotodia before he dissolved it.
Violence in the city culminated on November 17 with the murder of a leading judge, who was gunned down by former Seleka forces, provoking clashes in which two civilians died.
To curb the unrest, Djotodia on Friday said he was re-instating a curfew in Bangui from 10:00 pm to 6:00 am and on Saturday evening, security forces could be seen on the major intersections of the capital.
The UN Security Council plans to vote in early December on a resolution that would allow the CAR's neighbours, the African Union and France to intervene.
France Genocide News Desk Paris
Reactions: