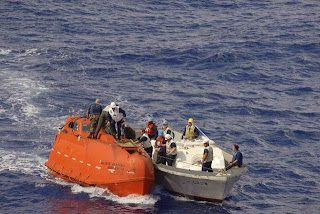 A  team from the amphibious assault ship Boxer tows the lifeboat from the Maersk Alabama to the amphib after the April 2009 rescue of Capt. Richard Phillips in the Indian Ocean. A former State Department official outlines the Obama administration's approach to global piracy and some of the concerns that remain. (MC2 Jon Rasmussen / Navy)


The recent pirate seizure of two Americans near Nigeria immediately draws comparisons to the pirate attack portrayed in the film “Captain Phillips.”

The movie depicts the threats ships traveling off the Somali coast faced in 2009. Capt. Phillips’ gripping rescue by Navy SEALs ends the movie, but not the story.


In 2007 and 2008, attacks off Somalia escalated significantly. Lucrative ransoms led to the creation of sophisticated networks, enabling pirates to improve capabilities and expand operations farther from shore. The Obama administration responded with a counterpiracy strategy made up of five key elements:

■ The U.S. devoted significant naval forces to the counterpiracy mission and helped organize an international task force dedicated to protecting shipping in the Indian Ocean. On any given day, up to 30 vessels from as many as 22 nations are engaged in counterpiracy operations there.

■ The Obama administration empowered industry to enhance security. Their counterpiracy diplomacy encouraged other nations to allow their flagged ships to have the option of allowing armed security teams.
The result: Not one ship with an armed security team has been successfully pirated.

■ The administration wielded international legal tools to deter piracy through effective capture, prosecution and incarceration. The U.S. supported efforts to increase prison capacity in Somalia and establish specialized piracy chambers in the national courts of one or more regional states.

■ The administration focused on disrupting pirate networks and financing. This recognized that seafaring pirates are being deployed by land-based criminals who manage and finance the pirate enterprise.

In 2012, Somali pirates captured just 10 vessels, compared with 34 in 2011 and 68 in 2010. As of the end of September, there had been only two hijackings off the coast of Somalia this year. While one hijacking is too many, this is tremendous progress.

Future vigilance is required to ensure the gains made against Somali pirates are preserved. Renewed vigilance is needed to fight piracy in the Gulf of Guinea. Success off the Somali coast gives hope that a concerted, multinational effort can lead to a similar result in the West African seas.