ODU Undergraduate Selected As Virginia Young Poet In The Community 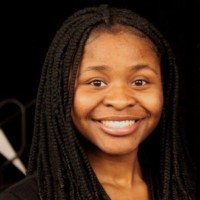 "I know a lot of people spend their lives being passionate about a particular thing, and poetry was not really that for me," said Adeleke, who writes lyrics for her music and sings pop and gospel music.

But when her creative writing professor encouraged her to enter the Young Poets in the Community contest, she went for it.

"When I gave it a try, I didn't know that I would actually win," said Adeleke, a sophomore studying English and journalism at Old Dominion University.

The Poetry Society of Virginia chose her, along with 23 other students from elementary schools, high schools and colleges across the commonwealth, for this recognition.

Young Poets in the Community was started by Luisa A. Igloria, Louis I. Jaffe professor of English and creative writing at ODU and the 20th Poet Laureate of Virginia. The project's goal is to showcase young poets in Virginia who are trying to use the power of poetry to influence social change, community and civic engagement, and emotional well-being.

"The poems and project proposals from these young poets were impressive," Igloria said. "They show not just a lot of awareness of what's going on in the world, but also so much heart and hope for a better future."

Heather Weddington, chief departmental advisor and lecturer in ODU's English department, said Adeleke was a perfect fit for the program.

"I found her to be very community-minded in her writing goals," Weddington said. So, I encouraged her to submit an application - and I'm so glad she did!"

The poem was inspired by her parents, who are immigrants from Nigeria.

"They came over here more than 20 years ago, and they've been grinding all of their lives just to give four kids a really good future," Adeleke said. "And it wasn't easy. I saw them fail sometimes, but because they had so much on the line they would keep getting up and trying over and over."

"Imaginary Things" refers to obstacles they faced that most families don't see.

Such as how the college degrees her parents earned in Nigeria were not recognized in the U.S., or how they were told to speak English by a grocery store employee who overheard them conversing in their native Yoruba.

"They might be imaginary for some people because they don't get it, but it was very real for my family," she said. "Instances such as these from Americans made my parents feel conscious of their surroundings and pushed them to work harder to prove themselves and protect us."

The Young Poets in the Community contestants were also asked to submit a public poetry project proposal. Adeleke's theme was "Release," which focuses on mental health.

"I think mental health is one of the most important things that a lot of us don't maintain," she said.

"Aderonke - likely on the first day of class - discussed her interest in creative writing as a means to empower people in taking care of their own mental health," she said.

Adeleke plans to place anonymous poetry boxes across ODU's campus where students can drop off their poems. She hopes that writing poetry will help students' relieve their burdens and struggles that they keep locked away.

In addition to the Virginia Young Poets in the Community Project, Igloria recently launched the Virginia Poets Database, a digital archive of Virginia poets meant to serve as a literary and educational resource. This project was made possible with support from ODU Provost and Vice President for Academic Affairs Austin Agho, ODU's Perry Library and Digital Commons Platform, as well as a fellowship from the Academy of American Poets.
Essay Poems The Writer