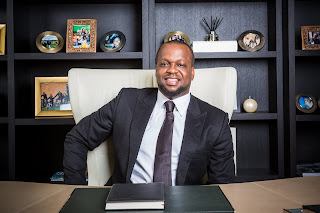 LONDON, ENGLAND (FORBES) -- Nigerian multi-millionaire oilman Igho Sanomi has received a commendation from Cancer Research UK and the Bobby Moore Fund for his philanthropy towards bowel cancer research in the United Kingdom.

At a recent Dining with the Stars Charity Event which held at One Whitehall Place in London, and which was graced by top British corporate executives, distinguished British MP’s and Sports personalities, Stephanie Moore MBE, co-founder of the Bobby Moore Fund, expressed her appreciation to the Nigerian business mogul for his company’s generous donations to the fund over the years. Since partnering as a sponsor of the Bobby Moore fund and Cancer Research UK six years ago, Taleveras DMCC, Sanomi’s Dubai-based oil trading company, has helped the organization raise more than $1.5 million.

The Bobby Moore Fund was set up in memory of World Cup winning England soccer captain Bobby Moore, who died from bowel cancer in 1993 at the age of 51. The Bobby Moore Fund, which is a charity in the United Kingdom, was founded by Moore’s wife, Stephanie Moore, in partnership with Cancer Research UK (CRUK) in order to raise money for research into bowel cancer and create public awareness of the disease. Since its inception, the fund has raised more than $30 million to tackle bowel cancer.

Bowel cancer is the fourth most common cancer in the UK. It is also the second most common cause of cancer death with more than 44 people dying from the disease every day in the UK according to the Bobby Moore Fund.

Igho Sanomi, 43, is the founder of Chairman of Taleveras Group, a $1.2 billion (annual revenues) commodities trading company, which trades millions of tons of oil and refined petroleum products annually. Taleveras is also active in the Power sector and has investments in oil producing assets in Nigeria, Cote D’Ivoire and Equatorial Guinea.
England Forbes London Newsroom