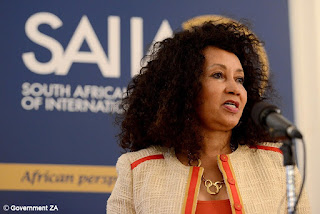 This would be to answer charges of mistreatment of foreigners.

Sisulu, who is also a national executive committee member of the ruling African National Congress (ANC), issued the warning while addressing party members in Stanger during an election campaign of the area on Monday, 15 April 2019.

The minister was reacting to recent xenophobic attacks on Malawians in Durban’s informal settlement areas, which saw South Africans chasing the foreigners from their homes and ultimately taking refuge in a mosque and police station.

“If we are charged at the International Criminal Court I will have to respond on your behalf on why it is that we are behaving like this towards foreign nationals in our country,” she said.

The minister said during a recent meeting with African diplomats to discuss the matter, she had to explain that the locals were facing poverty and competing with foreigners for resources. “I said there was bound to be tension when you are struggling for resources.

“They (the ambassadors), in turn, explained to me what their citizens were going through, and we agreed that we should plead with all our people that we should accommodate each other in the country,” she said.

South Africans go to the polls on 8 May to elect national office holders, including a president and MPs.
Africa Society South Africa