A pensioner who used 'prayer sessions' to help defraud a church minister and a worshipper out of tens of thousands of pounds, has been jailed for 18 months.
Serial fraudster Richard Abeson, currently wanted by Belgian police for a similar con, claimed he was a wealthy Nigerian oil trader READ MORE>>> 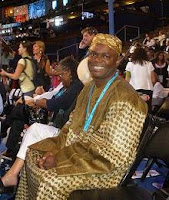 From Refugee to State Rep

Of all the people running for state Representative this year, Richard Komi was probably the only one who listed "refugee camp survivor" on his campaign literature. Before arriving in Manchester, he spent over three years in a camp in Benin after fleeing his native Nigeria. READ MORE>>>

Technology’s capacity to further electoral democracy in Africa first grabbed attention in 2000. Mobile phone coverage had spread across Senegal, allowing reporters to phone in results before they were announced officially, and independent radio stations were flourishing. READ MORE>>>

Asia's age-old battle with the pirates

The recent seizure of a giant oil tanker off Somalia may be one of the most audacious attacks by pirates, but for people here in South East Asia, it's an old and familiar story. READ MORE>>>