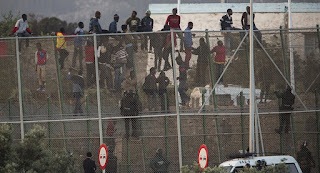 Sub-Saharan migrants sit on a metal fence that divides Morocco and the Spanish enclave of Melilla. Image: Santi Palacios/AP via Sputnik News

MELILLA, MOROCCO--One man died and 19 were injured as hundreds of sub-Saharan Africans – all men - tried to get to Spain’s enclave in North Africa, Melilla, separated from Morocco by a fence. About 200 reportedly managed to enter the Spanish territory; some of them allegedly joined other migrants in a local center with the victorious chants “boza, boza.”

Six civil guards have been injured in an incident at the border between Spain’s North African enclave of Melilla and Morocco as 300 migrants- all men from sub-Saharan regions of Africa - reportedly tried to find their way into the Spanish territory.

According to a local official, one man, who apparently had a heart attack, died despite the efforts of medical professionals. 19 were injured, sustaining cuts and fractures, after trying to climb over a border fence, and needed help in a hospital. 200 migrants managed to get in. Later a video emerged online that allegedly shows some of them celebrating in Melilla’ temporary migrant reception center. The people in the video are heard to joyfully chant "boza, boza," which stands for a “victory” in the Fulani language of West Africa.

This is not the first assault on Spain's borders in Morocco. Melilla and another enclave, Ceuta, regularly suffer from surges of Sub-Saharan migrants illegally crossing the border between the countries. Both enclaves recently received reinforcements, but this still hasn't stopped the flow of migrants.

Many of them still hope to make it to the other side of the fence and reach a temporary reception center, although some of them are later repatriated by migration services.

In late August, at least seven Spanish policemen in the enclave of Ceuta sustained acid burns after a group of roughly 300 migrants stormed the border fences with some of them hurling bottles with quicklime at law enforcement. In July over 600 migrants managed to get through the fences to Ceuta, the biggest assault so far this year.
Africa African Union News Desk Society