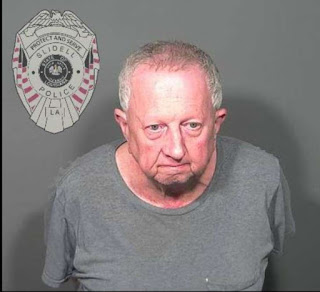 SLIDELL, LOUISIANA (USA TODAY) -- A Louisiana man was arrested in connection with the "Nigerian prince" scheme that has scammed people out of thousands of dollars, police announced on Thursday.

Michael Neu, 67, faces 269 counts of wire fraud and money laundering after being taken into custody following an 18-month investigation, according to the Slidell Police Department. Police said Neu is suspected of being the scam's "middle man" who obtained money and "subsequently wired" funds to his co-conspirators in Nigeria.

According to the Federal Trade Commission, the phishing scam begins with an email purporting to be from a high-ranking Nigerian official who seeks financial assistance or personal information to retrieve an alleged inheritance.

Though the scheme is often the butt of late-night TV jokes, people have fallen victim to the scam, officials say.

"Most people laugh at the thought of falling for such a fraud, but law enforcement officials report annual losses of millions of dollars to these schemes," the Slidell police said in a statement.

Authorities warn to be cautious when receiving suspicious emails or phone calls from unknown individuals and urge people not to disclose personal or financial information. Slidell Police Chief Randy Fandal said he hopes Neu's arrest serves as a warning to the public.

“If it sounds too good to be true, it probably is," Slidell Police Chief Randy Fandal said in a statement. "Never give out personal information over the phone, through e-mail, cash checks for other individuals, or wire large amounts of money to someone you don’t know. 99.9 percent of the time, it’s a scam.”
Corruption Nigeria Society
Reactions:

The Guardian From Uduma Kalu, Literary Correspondent, Enugu DARKNESS fell again in the Nigerian literary firmament yesterday when veteran novelist, pharmacist and public commentator, Cyprian Ekwensi passed on. He was 86 years old. The author of the popular Jaguar Nana series of novels was said to have died at the Niger Foundation in Enugu where he underwent an operation for an undisclosed ailment. It was not clear as at press time yesterday if he died during or after the operation. Earlier this year, Ekwensi released Cash on Delivery, a collection of short stories, which turned out to be his last book. When he turned 86 last year, the Association of Nigerian Authors (ANA), Lagos State chapter and the Committee for Relevant Arts (CORA), feted him. Ekwensi was celebrated as the forefather of the city novel. He is believed to be the author of the earliest published fiction on social life in the Lagos Metropolis. The accomplished novelist is remarkable for his down-to-earth style of writin