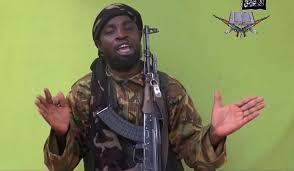 
MAIDUGURI, NIGERIA (AP) -- Boko Haram's leader has declared in a new video that he is alive, denying Nigerian government claims that his Islamic extremist group has been crushed.

President Muhammadu Buhari said last week that soldiers had driven Boko Haram from its last forest enclave in the northeast, boasting "the terrorists are on the run, and no longer have a place to hide."

In a video posted on YouTube, Abubakar Shekau announced: "I am here, well and alive" and that "the battle is just beginning." He urged his followers, in graphic terms, to continue the campaign.

Nigeria's military has claimed to have killed Shekau at least three times, and earlier this year declared he had been fatally wounded. This week, the army said it seized Shekau's Quran in the Sambisa Forest assault — wanting to indicate he was on the run.

Each time such claims are made, the Boko Haram leader reappears in a video to mock them.

In the latest, posted on YouTube on Dec. 29, he reiterates that "our mission is to establish an Islamic caliphate" in Nigeria — whose 180 million people are divided almost equally between mainly Muslims in the north and a predominantly Christian south.

In the video, Shekau does not mention some 200 schoolgirls kidnapped from a school in Chibok town who were believed to be held in the Sambisa Forest.

Nigeria is unlikely to see an end soon to the deadly suicide bombings, village attacks and assaults on remote military outposts in northeastern Nigeria. The Islamic State group, to which one faction of Boko Haram belongs, announced an attack on an army barracks "killed and wounded many" soldiers on Dec. 22 — the same day the army said it seized the forest hideout.

Already, there are reports that the insurgents have been regrouping south of their northeastern stronghold.