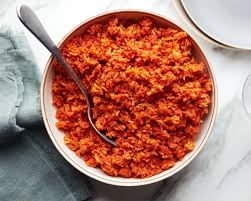 Slowly but surely, the Western world is finally beginning to get better acquainted with the cuisines of West Africa. However, there is one dish that has surpassed all others in terms of popularity and global recognition: jollof rice. This spicy pepper- and tomato-infused rice dish is a fixture in countries like Ghana, Nigeria, Senegal, Cameroon, Senegal, and Gambia.

In celebration of the staple dish, Poks Spices—an award-winning, Texas-based brand of West African spices and seasonings—has collaborated with the team at NYC spice importer Burlap & Barrel to create their new Jollof Rice Blend. The mission of the spice blend is to bring the flavors of West Africa to kitchen cabinets throughout the world.
The History of the McRib

Poks founder Abena Foli has food and agriculture in her blood. Her father has been a farmer in Ghana for over 40 years, just as his father was before him, and his grandfather before that.

“Seeing how labor intensive and really underappreciated farming was in Ghana, I didn't want to have anything to do with agriculture,” she says. Instead, she decided to pursue food science and eventually ended up transitioning to food labeling regulation, where she realized that West African foods and ingredients were not part of the conversation.

“There was no mention of West Africa when we talked about how to store ingredients that could be novel to the U.S. I wanted to fix that,” Foli explains. “I didn't want to complain about the problem anymore. I wanted to leverage the expertise that I had to solve the problem.”

Throughout her time working in food, Foli recognized that one of the best ways to introduce consumers to a new cuisine is often through seasonings and spices. In the summer of 2016, she founded POKS Spice and released the brand’s first two West African seasoning blends, drawing on the flavors of what is often referred to as the Holy Trinity of West African cooking: chili pepper, ginger, and alliums like onions or garlic.

Last year, Foli decided to reach out to Burlap & Barrel co-founder Ethan Frisch, not knowing that Frisch had actually placed an order with Poks just weeks before she emailed him. After Foli was a guest on the podcast Why Food?—co-hosted by Frisch and baker Vallery Lomas—the two began thinking about how to collaborate further.

As they pondered different approaches to a collaboration, WGSN, a leading trend forecasting company, announced that jollof rice was one of its flavor trend forecasts for 2022 and beyond. This was a light bulb moment. So they decided that their next move would be a seasoning blend that captured the spirit of jollof rice in a single jar.

“I had to put on my food scientist hat again,” Foli says. Knowing the cultural significance of jollof rice, she wanted to focus on what story she was telling through the blend of seasonings. While jollof rice is popular throughout West Africa, there are variations in preparation depending on where you go. “Generally, it’s accepted in African culinary history, and history about the transatlantic evolution of food from West Africa to the Americas, that jollof rice started with the Wolof tribe of the Senegambia region, which is modern-day Gambia.”

However, thanks to West Africans all around the diaspora, the playful banter known as “jollof wars,” a debate about which country in West Africa is home to the best style of jollof, has made it abundantly clear that is no one singular way of cooking jollof rice.

Foli began by dissecting jollof flavor profiles from Senegal in the west spanning eastward all the way to Nigeria. In some regions, jollof has a more herbaceous flavor profile, other regions use bell peppers and tomatoes, whereas some use only tomatoes. She also had to keep in mind who her consumers would be in the United States.

“The consumer demographic that Burlap & Barrel has is predominantly white and American,” says Foli, who had to balance various different spice tolerances without raising eyebrows from other West Africans. “My people will come for me,” she adds jokingly.

Eventually, after much testing and development, Foli arrived at a blend that captures the essence of jollof rice while paying homage to preparation styles from across West Africa. The blend is a mixture of sweet paprika to replicate the flavor of red bell peppers typical of Nigeria and Cameroon, Ghanaian and Ivorian-style tomato powder, herbs like bay leaves and thyme to reflect Senegal and Gambia, and, of course, the holy trinity.

While the blend is excellent for seasoning jollof rice, Foli wants customers to know that the options are really limitless.

“We’ve had people use it for shrimp or for chicken—we even made a dip recipe!” she says. “It truly lends itself to so many different uses.”
READ ORIGINAL ARTICAL HERE
Culinary Correctness Essay Foodie West Africa