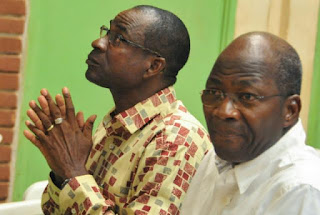 OUAGADOUGOU (AFP) - A military court in Burkina Faso on Monday convicted and jailed two generals on charges of masterminding a coup in the fragile Sahel state in 2015.

General Gilbert Diendere was convicted on charges of murder and harming state security and handed a 20-year prison term, while General Djibrill Bassole, accused of treason, was ordered jailed for 10 years.

The coup, carried out by troops loyal to ousted president Blaise Compaore, was thwarted by public protest but at the cost of 14 lives and 270 wounded.

The two generals were the leading figures in a 19-month trial of 84 people accused of the attempted overthrow of Burkina's transitional government.

The coup was mounted by an elite unit of the army, the Presidential Security Regiment (RSP), on September 16 2015, less than a month before scheduled general elections.

It fizzled out within a week after army-backed street protestors attacked the rebels' barracks.

Compaore had fled to Ivory Coast in October 2014 after 27 years in office marked by assassinations and mounting public unrest.

He was forced out by a revolt sparked by his attempts to extend his grip on power, and a transitional government took the helm.

Diendere, 60, had been Compaore's right-hand man and a former head of the RSP. He is rumoured to have taken part in the assassination in 1987 of Burkina's charismatic Marxist leader, Thomas Sankara -- the killing that brought Compaore to power.

Diendere, who was educated at the French military school of Saint-Cyr, gained high marks within the French intelligence service for his "professionalism and expertise" during the Compaore years, a source said.

This included contacts with Sahel jihadists that deterred them from operating in Burkina Faso, it said.

During the 2015 coup, Diendere took the helm of the putschists' governing body, the so-called National Council for Democracy.

Bassole, 62, was a foreign minister under Compaore and was one of the regime's most visible figures. He gained prominence in Arab and African countries as a mediator for the UN in the Darfur crisis.

Both had denied the charges against them, and Bassole's lawyers argued for him to be sent to France for cancer treatment.

But the prosecution, which had sought life sentences, said the pair had been instrumental in events.

Diendere was "the main instigator in the coup" and Bassole "helped to prepare (it)," said military prosecutor Pascaline Zoungrana.

The pair have two weeks in which to appeal.

Among 10 rebel troops who arrested members of the transitional government, a sentence of 19 years was handed down against a non-commissioned officer, Eloi Badiel, and 17 years against another NCO, Moussa Nebie, nicknamed Rambo. The others in this group were given 15 years.


Lieutenant-Colonel Mamadou Bamba, who had read the coup leaders' statement on television, was given 10 years, five of them suspended.

Although the would-be putsch was quickly quelled, it had traumatic consequences for Burkina Faso, one of the world's poorest countries with a history of chronic instability.

It dug a deep rift in the armed forces, weakening their ability to cope with mounting jihadist attacks that have now claimed more than 500 lives, analysts say.

Many in Burkina have been hoping that the end of the trial will shed light on what happened and usher in reconciliation.

Guy-Herve Kam, a lawyer representing civilian plaintiffs, said the trial had served the purposes of transparency.

"Today, we know who did what and, especially, why."

"For the Burkinabe people, this is a historic day," said fellow attorney Prosper Farama, paying tribute to a "fair and transparent trial" and "a victory for the state of law."

Paul Ouangrawa, secretary of an association of wounded victims, also said he was satisfied with the outcome.

"We are now waiting to see what happens next, especially about compensation, because there are dead and wounded."

But Serge Bayala, a member of a citizens' campaign group called Balai, said he was disappointed. Many of the prison terms were below what prosecutors had demanded.

"The level of punishment is not equal to even a third of the damage inflicted to lives and property," he argued.
AFP Burkina Faso Newsroom