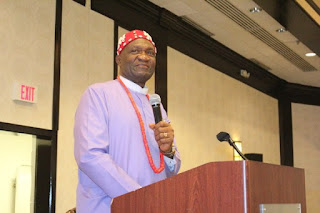 Nwodo, who spoke while delivering the 9th Convocation lecture of the Chukwuemeka Odumegwu Ojukwu University (COOU), at Igbariam campus, Anambra State, yesterday, described the Nigerian Biafran Civil War as the most devastating experience of Igbo with the Federal Republic of Nigeria.

Speaking on the topic: “The Igbo in the building of the Nigerian nation – the unrealised dreams,” he noted that the war claimed lives of millions of Igbo, while figures quoted by various reports on the war victims were totally unreliable, due to inaccessibility of data among Biafra.

Nwodo also recalled that several Igbo lost contact with their race and kinsmen during the war, when some of them were flown across some African countries while running for their dear lives, but never returned home when the war ended.

He said despite the setbacks, which the civil war brought to the Igbo, it was not all disappointment and dismay, because the suffering and deprivation brought out the best in Igbo people.

He said it has become necessary for universities in Igbo land, like the COOU to recall the “ingenuity, inventiveness and the sheer determination that led to scientific breakthrough in Biafra and replicate them.”

While talking about the current challenges to viable nationhood in Nigeria, Nwodo said the current Nigerian Constitution does not owe its validity and authority to local legal factors, such as a referendum or an approval vote.

He said because of the flawed constitution which Nigeria operates, revenue allocation is shared, using a parameter with a weighted proportion that respects equality of all states, while mineral and oil resources are exclusively domiciled in the federal exclusive legislative list, contrary to the agreements of the forefathers in the Lyttleton Constitution and the 1963 Constitution.
Biafra Daily Sun Igbo Igbo Politics Nd'Igbo