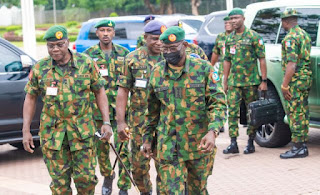 ABUJA, NIGERIA (THIS DAY) -- The military high command, yesterday, disclosed that some 613 repentant terrorists undergoing a programme of deradicalisation in Gombe State, would be reintegrated into the society by next month, February.

It said the repentant insurgents, who were expected to be released to various countries and states were to be provided with starter kits to start small businesses and enable them start a new life.

Critics had viewed the impact of the activities of the insurgents, who were described as “low profile” by military authorities as given expression in the over seven million displaced persons and thousands of deaths of civilians and military personnel over the years and the psychological effect on the actual victims of the insurgency.

Speaking at the opening ceremony of a stakeholders’ meeting to work out modalities for the transfer of repentant terrorists to state governments, the Chief of Defence Staff, Gen Lucky Irabor, said combined air strikes and artillery bombardments, had degraded terror groups, Boko Haram and the Islamic State for West African Province (ISWAP), forcing mass surrender of 80,000 insurgents and their families and restricting remnants to a small part of Sambisa Forest.

“This meeting is part of the activities geared towards the successful transfer of rehabilitated clients to their state government authorities for reintegration. Far reaching decisions are usually taken at these sessions and I have been particularly impressed with the manner at which the outcomes had been implemented.

“This is yet another session, and my expectation

reintegration of the 613 clients currently undergoing

would be exhaustively discussed.

“It is important to remind us all that the

insurgency for over 12 years now.

“Currently, BHT/ISWAP have been significantly

“Through consistent and effective air

interdictions along with well- coordinated clearance operations on positively

identified strongholds of the insurgents, troops have continued to inflict

heavy casualties on the groups and their leadership cadre. These sustained

causing many to surrender to the AFN.

“As at today, over 80,000 insurgents and their family members have surrendered while those captured have been

tried and convicted to various jail terms by the law courts. As we speak, many

more captured combatants are being held in several correctional facilities and

their trial is ongoing,” he said.

According to him, Operation Safe Corridor

(OPSC) was established by government to create opportunities for willing

“The scheme is a multi-agency and

humanitarian operation, which draws from the expertise of over

17 services, ministries, departments and agencies with the

support of local and international organisations as well as interested friendly

“I can only describe this whole of government

approach and the huge synergy existing among all players in OPSC as awesome.

Therefore, it is gratifying to inform this gathering that the successes of OPSC

continues to resonate within the region and in the diaspora, thereby attracting

the interest of researchers from far and wide.

“I must emphasise that it is critical for all

stakeholders involved in the reintegration processes in order to mitigate, or

was represented by the Chief of Defence Training and Operation, Maj

Reiterating that the operation

consisted of personnel drawn from

17 services, ministries, departments and agencies, he

noted further that since the commencement of the Programme in 2016,