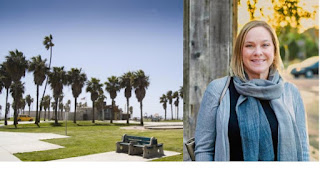 Traci Park photo via City watch
LOS ANGELES (CNS) - A handful of protesters, who tried to disrupt the swearing in ceremony of newly elected Councilwoman Traci Park at Loyola Marymount University, were removed by police, but no arrests or altercations occurred.

Video of the Saturday ceremony, posted on Twitter by freelance journalist Jon Peltz, showed intermittent interruptions as protesters stood and spoke, some holding up their phones while apparently filming the proceedings.

In turn, each protester was escorted out by Los Angeles police officers and other staffers while Park paused momentarily. It was unclear what the demonstrators were saying because each was drowned out by supporters chanting Park's name. Park defeated fellow attorney Erin Darling 52.02% to 47.98% in the Nov. 8 race for the Los Angeles City Council's 11th District seat, replacing longtime councilman Mike Bonin who did not seek re-election.

She centered her campaign around Westside residents growing concerns about homelessness and vowed to ``insist'' on day one that the city's controversial anti camping ordinance be enforced in the 11th District.

The ordinance bans people from sitting, sleeping and storing property in certain areas of the city, and was recently expanded to include banning encampments within 500 feet of schools and daycare centers. It has attracted fierce disagreement from activists and protesters who repeatedly tried to disrupt council meetings during the summer when expansion of the law was being considered.

Bonin repeatedly voted against the ordinance and its expansion, joining critics in claiming the law ``criminalizes'' homelessness. Park portrayed Darling as being similar to Bonin, including his approach to homelessness.

``I have called out irresponsible and failed approaches to homelessness and homeless interventions that we have seen in our community,'' Park said during the campaign. In responding to Saturday's protesters, Park mentioned the criticism she had faced during the campaign.

``Even in the darkest days of the race we never let the distractors get us down and we're not gonna let them today,'' Park told the audience in Loyola's Roski Dining Room, which included former Mayor Antonio Villaraigosa and newly elected City Attorney Hydee Feldstein Soto. Later, Park led the crowd in a round of applause for ``our police officers.''

The disruptions during Park's swearing in Saturday came one day after Councilmember Kevin de León got into a physical altercation with a community activist at a Christmas tree lighting event in Lincoln Heights and was confronted by protesters earlier in the day when he returned to City Hall for the first time in nearly two months after being recorded making racist remarks during a 2021 strategy meeting.

As for Park's protesters, they later told the Mar Vista Voice website that they perceive Park's policies as ``racist'' and vowed to ``be loudly opposing her policies in all public forums throughout her tenure as a councilmember.''
Democracy Election Petitions Los Angeles News Desk