Guinea Junta Agrees With Bloc To Hold Vote In Early 2025 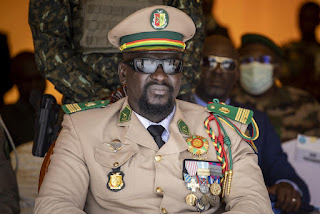 The regional bloc known as ECOWAS has spent more than a year negotiating with Col. Mamady Doumbouya’s government following the September 2021 coup and had imposed sanctions on the junta leadership. It was not immediately known how soon those might be lifted.

The junta initially proposed a three-year transition, which was rejected by the regional mediators who already had obtained two-year transition deals after similar coups in both Mali and Burkina Faso. Guinea’s two-year clock starts in January, with elections then due in early 2025.

For some, the news was bittersweet as demonstrations protesting the duration of the transition in Guinea have turned deadly, including three killed Thursday.

“It took more than 17 deaths to reach a consensus,” complained Aly Baldé, whose brother was shot dead in Conakry.

Guinea became the second country hit by a recent coup in West Africa, a little over a year after Mali’s military junta overthrew that country’s democratically elected ruler. Since then, Burkina Faso has seen two coups of its own.

Burkina Faso and Mali already have agreed with ECOWAS on election dates — Mali’s is scheduled to be held by March 2024, but the situation in Burkina Faso is now in doubt after the latest coup there.

A deal had been reached with the man who first toppled Burkina Faso’s president in January to hold a vote by July 2024. But it remains to be seen whether Capt. Ibrahim Traore, who seized power on Sept. 30, will fully honor that agreement.

ECOWAS has said that Mali, Guinea and Burkina Faso will all remain suspended from the bloc until elections are held.

Beyond setting dates, ECOWAS also has expressed concerns about what shape the future elections will take and whether the coup leaders turned interim presidents will be allowed to run as candidates.

Earlier this month, Doumbouya reiterated that neither he nor any member of the junta or the transitional government would take part in the eventual elections now due by January 2025.

Conde had won a landmark 2010 election after decades of dictatorship and strongman rule in Guinea, only to eventually try to seek a third term in office. He claimed the country’s term limits did not apply to him. While he succeeded in winning a third term, he was overthrown nine months later.