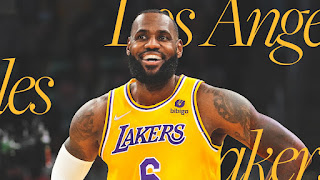 LEBRON JAMES. IMAGE: NBA
BY BRAD SULLIVAN
LOS ANGELES (LAKERS DAILY) -- “LeBron James was given a billion dollars by Nike, the establishment, anti-human, neo-liberal, Marxist, globalist establishment, which is also church of LGBTQ,” White said. “He was given this billion dollars to keep his mouth shut about the single greatest humanitarian crisis of our generation. That is the two million people being placed in the concentration camps in China for no other crime other than being Muslim.
“Now he (James) won’t speak on that. Why? Number one, it’s an economic injustice that he’s done to take that payoff to shut his mouth because really, he should have asked Nike for $40 billion. He should have got at least $500 million a year, if not a billion dollars a year because Nike makes $40 billion of revenue a year and he represents at least 1/40th of their commercial value and influence.”
The Uyghurs are primarily Muslims who have been imprisoned in camps that the Chinese have described as “re-education camps.”

However, human rights organizations have criticized that description, saying that the Chinese have been guilty of genocide in their treatment of the imprisoned Uyghurs. The United States government has also made that claim.

Nike has also been subject to plenty of criticism for decades with regard to human rights issues, with James’ connection to the company spanning his entire NBA career.

However, White’s explosive claim offered no specific evidence that specifically linked any direct payment to James from Nike for his silence.

Unlike James, White’s NBA career consisted of playing just three games for the Sacramento Kings during the 2013-14 season. That microscopic career was unexpected, considering that he’d been the 16th overall pick of the 2012 NBA Draft by the Houston Rockets.

The cause of White’s brief stint in the NBA was connected to mental health concerns, specifically the affliction of generalized anxiety disorder. A key facet of that disorder is a fear of flying, which is a necessity when playing in the NBA.

More recently, White entered the political arena and ran for Congress this year in his native Minnesota. He lost in the Republican primary to Cicely Davis who is now running against controversial Ilhan Omar.

Without any evidence to back up his claim, White’s charge against James isn’t likely to get much traction when it comes to additional media attention. Right now, James is more concerned with getting ready to start his 20th NBA season, which gets underway on Oct. 18.
LA Lakers Los Angeles NBA Finals Sports