1st Confirmed Monkeypox Fatality Reported In The US 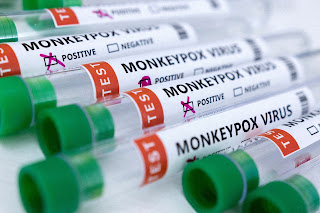 (opens in new tab) Monday (Sept. 12). The U.S. Centers for Disease Control and Prevention (CDC) also assessed the case and confirmed that the death was due to a monkeypox infection, according to the health department.


"The resident was severely immunocompromised and had been hospitalized," the health department statement reads. In general, immunocompromised people face a greater risk of developing severe monkeypox infections than the general public, as do children younger than age 8, people with a history of eczema and people who are pregnant or breastfeeding, Live Science previously reported.

"To protect confidentiality and privacy, additional information on this case will not be made public," the statement continues. "Persons severely immunocompromised who suspect they have monkeypox are encouraged to seek medical care and treatment early and remain under the care of a provider during their illness."

The death of the L.A. resident may mark the first confirmed U.S. monkeypox fatality during the ongoing outbreak. In late August, the Texas Department of State Health Services reported(opens in new tab) a similar case of a severely immunocompromised person dying after being diagnosed with monkeypox; however, at the time, officials were still investigating what role monkeypox played in that death. And as of Sept. 12, officials still hadn't announced whether that fatality was caused by monkeypox, the Los Angeles Times reported(opens in new tab).

As of Monday, nearly 58,000 cases of monkeypox had been reported worldwide, and about 57,500 of those cases had occurred in locations where monkeypox has not historically spread, according to the CDC(opens in new tab). The U.S. alone has reported nearly 22,000 cases, with 4,300 of those cases occurring in California, the agency reported(opens in new tab).

At least 18 people have died of monkeypox, globally: eight in places where monkeypox does not typically circulate and 10 in places where it does. (It's unclear whether this death toll has been updated to reflect the death of the L.A. resident, although as of Tuesday (Sept. 13), the fatality had not yet been noted(opens in new tab) on the CDC's main monkeypox landing page.)

The monkeypox viruses driving the current outbreak, known as clade II monkeypox viruses, are typically less deadly than other monkeypox lineages. Historically, clade II viruses — formerly called the West African clade — have killed between 1% and 3.5% of people diagnosed with the disease, while clade I viruses — formerly the Congo Basin clade — have a case fatality rate between 6% and 10%, Live Science previously reported.

People who die of monkeypox may do so due to pulmonary distress, inflammation in the air sacs of the lungs (bronchopneumonia) or inflammation of the brain (encephalitis) that develops as a result of the infection, STAT reported(opens in new tab). Other monkeypox fatalities have been tied to secondary bacterial infections and sepsis, a life-threatening immune reaction that causes widespread inflammation and organ damage.

So far in the current outbreak, doctors haven't determined whether all those who died of monkeypox died of the same immediate cause, such as pulmonary distress or sepsis, STAT reported. This may become clear if and when more data about each death are made publicly available or described in research papers.
READ ORIGINAL ARTICLE HERE
Live Science Monkeypox News Desk Scientists