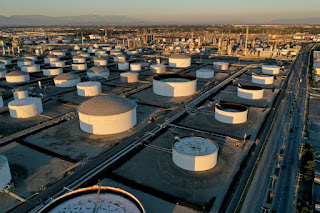 In a world grappling with one of the worst energy crises in history, the US is steadily becoming the go-to supplier of incremental barrels. It’s likely to remain in that position as Opec+ spare capacity is limited and the EU looks to wind down most Russian crude purchases in December. Fuel prices soared after Russia’s invasion of Ukraine upended flows, while “extreme” volatility in the oil futures market as a result of low liquidity has prompted Saudi Arabia’s oil minister to consider further supply cuts despite shortages in consuming nations.

US suppliers that have captured market share across Europe will likely hold onto it over the next 2 years as other producers, including those in the North Sea and West Africa, have not been growing their output as steadily, said Conor McFadden, head of oil for Europe at Trafigura, among the biggest exporters of US crude.

While the end of American reserve oil releases this fall might slow exports briefly, it’s unlikely to dent these mammoth outflows long term, according to a poll of industry analysts. US drillers have been growing production, even if at moderate rates, and the country’s refining capacity is not expected to expand, leaving more oil for export. In fact, weekly exports have exceeded 4 million barrels a day for consecutive weeks for the first time since the export ban was lifted at the end of 2015, according to the latest Energy Information Administration data released Wednesday.

Much of that will cater to Europeans drawing new supply lines ahead of the December boycott of Russian energy by the region’s trade bloc. Currently, the US accounts for only about 16 per cent of Europe’s waterborne crude imports, up slightly from 15.3 per cent before the war, said Vortexa senior oil market analyst Rohit Rathod.

It’s not just about filling Europe’s gaping energy hole left behind by Russia either. American flows already are replacing barrels from other traditional suppliers to Europe, including Kazakhstan where its flagship CPC crude has seen multiple export disruptions because of technical problems.

US volumes are nipping into West Africa’s market share in Europe as well as helping offset disrupted crude flows from Libya due to politically-driven production outages, said Hunter Kornfeind, an oil market analyst at Rapidan.

European refiners have become more comfortable using American oil that is shipped reliably and stably, Trafigura’s McFadden said. “When the world’s energy supply chains got so stressed, this was the crude that filled the hole. When Europe didn’t know who they were gonna buy from they went to Midland because they know it will arrive,” he said.

The influx of US barrels has also pressured regional European crudes. At the start of the week, Ekofisk crude, a light-sweet grade in the North Sea that competes with US supplies, was trading about US$3.50 above Dated Brent. That compared with about US$7 a month earlier. Meanwhile Forties crude, another North Sea grade, was trading at a discount of 70 cents to Dated Brent compared with a premium of more than US$5 a month prior.

Looking ahead, purchases from Asia are also key in keeping US crude exports elevated. Over the past 2 months, Asian countries have scooped up large volumes of American oil, as competition with Middle Eastern supplies heats up. Even so, greater volumes of Russian oil are still headed to China and India since the invasion of Ukraine.
“The long-term trend in a world that needs more oil is that the US is going to be exporting more,” McFadden said.
Michael Bloomberg News Desk Oil United States