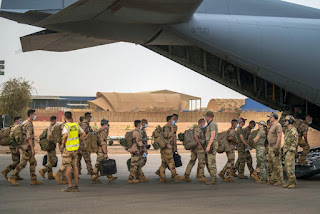 FILE - French Barkhane force soldiers who wrapped up a four-month tour of duty in the Sahel leave their base in Gao, Mali, June 9, 2021. French officials announced Monday Aug. 15, 2022 that the last soldier from the operation has now left Mali, finalising the withdrawal of French troops after a 10-year-long presence. (AP Photo/Jerome Delay, File)

NICE, FRANCE (AP) — The last French army unit left Mali on Monday, according to a statement from the French military, nine years after Paris sent troops to the West African country to help drive Islamic extremists from power.

France’s armed forces completed their withdrawal from Mali six months after French President Emmanuel Macron announced his plan to pull out of the country following tensions with the ruling junta.

Tensions have also grown over the past year between Mali, its African neighbors and the European Union after Mali’s transitional government allowed Russian mercenaries from the Wagner Group to deploy on its territory.

The last contingent of French soldiers of the so-called Barkhane force present on Malian territory crossed into neighboring Niger on Monday afternoon, the French military said. They were based in Gao in northern Mali, a region plagued with jihadi violence.

France had about 4,300 troops in the Sahel region, including 2,400 in Mali, in February when Macron announced the withdrawal. With French army units out of Mali, “the Barkhane force has been reorganized outside the country,” the French army statement said Monday, adding that the “major logistic challenge has been met in an orderly and safe way, in coordination with all its partners.”

Macron has previously said that the “heart” of the French operation will be moved to Niger, especially in the region bordering Burkina Faso. The so-called Barkhane force is also involved in Chad, Niger, Burkina Faso and Mauretania.

French forces have been active in Mali since 2013, when they intervened to oust Islamic extremists from power. But the insurgents regrouped in the desert and began attacking the Malian army and its allies. An August 2020 coup led by Col. Assimi Goita grabbed power in Mali. Goita carried out a second coup by dismissing the civilian leaders in Mali’s transitional government and putting himself in charge last year.

Following Macron’s military withdrawal announcement in February, European leaders also said that an EU-led military task force known as Takuba is also pulling out of Mali. They criticized the Malian junta for hiring the Wagner Group, which the EU accuses of fomenting violence and committing human rights abuses in Africa.

Macron and other European leaders have repeatedly said the military withdrawals from Mali will not result in abandonment of the people in the Sahel region in their fight against Islamic extremists.