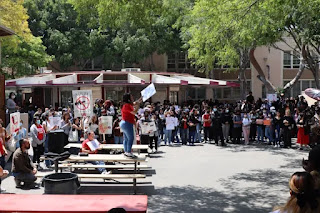 Ashley Castillo, a junior at Hollywood High School, speaks during a walkout she organized at her school following the school shooting at Uvalde, Texas, where 19 students and two adults were killed. Across Los Angeles, students participated in walkouts in support of gun-control measures.
(Cristian Arguello)
MY MELISSA GOMEZ

LOS ANGELES, CA (LOS ANGELES TIMES) - When Ashley Castillo was in 7th grade at Virgil Middle School, she walked out with her classmates, calling for stronger gun control laws after 17 students and staff were killed at a Parkland, Fla., high school. Now a high school junior, she’s doing it again — this time, 19 elementary school students and two teachers were shot to death Tuesday in Texas.

“It’s devastating. It’s heart-wrenching,” Ashley said before leading the walkout at Hollywood High School on Thursday. “We’re stuck with the responsibility of planning these events and having to advocate for ourselves ... thoughts and prayers are not getting us anywhere after years and years.”

Throughout the Los Angeles region and across the country, students and teachers walked out of their classrooms as part of an organized protest after the school shooting in Uvalde, Texas, where an 18-year-old gunman opened fire inside a classroom at Robb Elementary School. Students Demand Action, an initiative that is part of the Everytown for Gun Safety group, organized more than 200 walkouts Thursday across the country.

The student group was launched after the 2018 shooting in Parkland, Fla., and advocates for gun-safety policies. On social media, videos and images captured students participating in such states as Rhode Island, New York, Missouri and California.

Ashley, who founded the Students Demand Action club at her school, said she believed it was important to walkout today to honor the students killed in Texas and the people whose lives were cut short by gun violence, including the people killed May 14 at a grocery store in Buffalo, N.Y.

On Thursday, Ashley, with the support of her school administration, gave a speech during which she spoke about the shooting in Texas and named the victims. The school had a moment of silence and told the school the walkout would be held at 11:30 a.m.

When the time came, she was joined in the campus quad by hundreds of other students, some who held signs. She told her classmates that they can call elected officials and register to vote. And again, she listed the names of the victims in Uvalde as well as those in Buffalo.

“Protect children not guns,” one student’s sign read. “Fix this before I text my mom from under a desk,” another read.

In Woodland Hills, students at El Camino Real Charter High School began their walkout at 9 a.m. Videos posted online show dozens of students chanting “enough is enough” as they marched on the campus. In other cities, students held signs and chanted. One student held up a piece of paper that read: “How loud do the screams have to be before you listen” and “I should worry about my SATs not my life.”

At John Marshall High School in Los Feliz, students walked off campus and held up signs near an intersection.

In 2018, students from Marjory Stoneman Douglas High School led a massive march after the shooting at their school to demand action on guns. The effort sparked a wave of student activism and stricter gun control laws.