Some South L.A. Residents To Get $150 Per Month For Transit As Part Of New Program 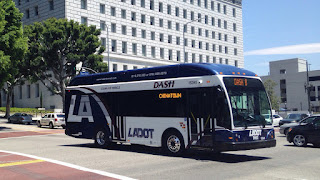 BY NOURAN SALAHIEH AND COURTNEY FRIEL

LOS ANGELES (KTLA) - The Los Angeles Department of Transportation launched a new program to improve mobility in South Los Angeles and it will involve monthly payments for some residents.

“For too long in Los Angeles, if you do not own a car or cannot afford a car, economic mobility, quality of life, fulfilling your dreams was out of reach,” LADOT General Manager Seleta Reynolds said. “In L.A. County, you can get to 12 times as many jobs in an hour by car as you can in an hour by transit.

It will also fund job training for up to 200 people working in electric vehicle and e-bike maintenance.

And most notably, 2,000 South L.A. residents will get $150 a month for a year to spend “on whatever they need to get around,” Reynolds said.

Residents will be able to use the money to pay for electric vehicle rental, transit passes, e-bikes and e-scooters, bus and rail tickets and vouchers to get around on Uber or Lyft.

While no details were available yet on eligibility requirements, LADOT’s website says the subsidized wallet will be offered to “community members that face mobility challenges including students, senior citizens, low-income residents and people with differing abilities.”

The Mobility Wallet would expand TAP, the LA Metro Transit Access Pass card, to include the subsidies for residents covered by the pilot program.

South L.A. residents can sign up here to get an update when the service is available.

Besides the payments, the program will also entail changes to physical infrastructure and upgrades for pedestrians.

Reynolds said that this means officials will be checking with residents to look into adding bike lanes, bus only lanes, traffic signals, and making other safety improvements.

It will also involve bringing in shared electric vehicles through BlueLA, installing electric vehicle chargers and buying an electric bicycle library that will let residents check out bikes for extended periods of time.

LADOT will also pilot an on-demand community electric shuttle to fill in gaps in DASH bus service to eliminate the need for transfers.

The pilot project will cover much of South L.A., bounded approximately by the 10 East Freeway to the north, South Alameda Street to the east, Crenshaw Boulevard to the west and Florence Avenue to the South.

“In South L.A. there are more traffic fatalities and severe injury collisions. We see poor air quality and higher rates of childhood asthma, leading to more mistakes at school and we see fewer people being able to access what they need, whether it’s food, jobs or medical services,” Reynolds said.

The region is also home to a population of over 370,000 people with 29% percent of households living below the poverty level, officials said.

Over 6% of households in the area reported owning no vehicle and 30% owning one vehicle. About 6.7% of workers in the area walk or bike to work and 14.3% take transit to work, according to LADOT.

“Besides increasing access to transportation options, UBI universal basic mobility will serve as a vehicle to ensure that no one is left behind while addressing climate change,” L.A. City Councilman Curren Price said.