Los Angeles Progressives Are Being Mugged By Reality 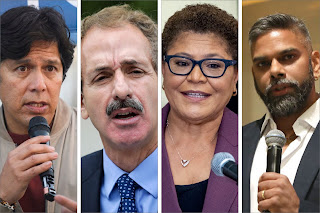 Democratic Rep. Karen Bass, one of the progressive candidates in the race, wants to put more police officers on patrol because residents of the city don’t feel safe. Bass and City Councilman Kevin de Leon, another progressive candidate, support clearing homeless encampments near parks, schools, and public buildings. And Bass is polling even with former Republican Rick Caruso, who has made crime a focus of his campaign.

All of this has roiled progressive activists in Los Angeles, according to Politico. These activists are “disappointed” and claim that the “narrative around rising crime is overblown." But it is both the political reality (homelessness and crime are top issues, according to voters) and the actual reality. There were 397 homicides in Los Angeles in 2021, the most in the city since 2006. Los Angeles residents have been warned by the police department not to wear jewelry in public or travel alone.

Crime and homelessness aren’t problems you can hide from voters. Progressives, under Los Angeles County District Attorney George Gascon, have received all of the criminal justice reforms that they wanted. As a result, repeat criminals have been terrorizing businesses, and violent criminals have been emboldened. The city's government only cares about homelessness when the Super Bowl brings cameras to town. These progressive attitudes have made residents in the city less safe. Naturally, they want to reverse course.

This scenario played out in New York City, with Eric Adams taking down progressive candidates for mayor by focusing on crime. In San Francisco, Mayor London Breed has also refocused on crime as progressive District Attorney Chesa Boudin is facing a recall over the lawlessness he has allowed in the city.

Crime is a real problem that progressives in cities run by Democrats will have to grapple with. Between the soft-on-crime policies they have pursued and the tolerance of Black Lives Matter riots, this problem has been allowed to fester. Letting gangs and repeat criminals run free in Los Angeles is going to have electoral consequences — because rosy ideas about criminal justice reform don’t sell when it becomes clear that they make everyone less safe.
Essay Los Angeles News Room Politics