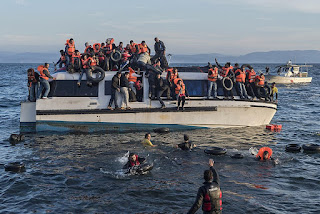 LAGOS (NAN) - The European-funded project, Action Against Trafficking in Persons and Smuggling of Migrants (A-TIPSOM) Nigeria, has begun a two-day Capacity Building and Editathon Workshop on Trafficking In Person, Smuggling on Migrants (TIP&SOM) for Wikipedia editors.

The News Agency of Nigeria (NAN) reports that not fewer than 45 Wikipedia editors from across the country are participating in the programme which started on Tuesday in Lagos.

A-TIPSOM Technical Adviser on Communication, Mr Joseph Osuagwu, in his remarks, said the training was meant to build the capacity of Wikipedia editors on issues of human trafficking and smuggling of migrants.

Osuagwu noted that Wikipedia is the world’s largest encyclopedia, most referenced and most accessible compilation of knowledge ever existed in the history of the human race.

“There is need to increase the content and articles about human trafficking and smuggling of migrants on Wikipedia where millions of visitors will read, being the brain behind this workshop.

“Wikipedia has over 6 million English articles, so this workshop is organised so as to enable them to create evidence-based contents on TIP and SOM on Wikipedia.

“Wikipedia can be read in over 300 languages and averages more than 18 billion page views monthly, making it one of the most visited websites in the world with 46 million articles accessed by 1.4 billion unique devices monthly,” he said.

Osuagwu said that the initiative would go a long way to boost awareness and increase citizen’s general knowledge on human trafficking and measures to eradicate the problem.

He added that the objectives was to build the capacity of participants on the role of Wikipedia editors in combating TIP&SOM and to increase the number of TIP&SOM articles/pages on Wikipedia.

Osuagwu disclosed that emphasis would be in English, Hausa, Igbo and Yoruba languages respectively as part of efforts to improve existing TIP and SOM contents on Wikipedia.

“This workshop is part of the Action Against Trafficking in Persons and Smuggling of Migrants in Nigeria (A-TIPSOM), funded by European Union and implemented by International and Ibero-American Foundation for Administration and Public Policies(FIIAPP),” he added.

The workshop had Media Relation Officer of National Agency for the Prohibition of Trafficking in Persons (NAPTIP), Mr Adeloye Vincent, Mr Muslimu Mohammed, a Superintendent of Immigration as facilitators.