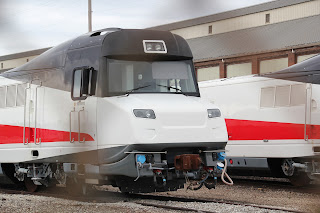 MILWAUKEE, WIS. (CBS 58) -- A Milwaukee manufacturing plant has reached a major deal between Milwaukee and a Nigerian state.

The governor of Lagos State, Nigeria is visiting Wisconsin this week to buy two trainsets that were originally built for the state of Wisconsin.

"They'll actually be in service -- serving people and providing a new transit option in another community," said Acting Mayor Cavalier Johnson during a news conference on Tuesday, Jan. 18.

The Spanish company Talgo, which has a plant at 27th and Townsend in Milwaukee's Century City business park, manufactured the trains 11 years ago.

"For us, it's important that our trains are utilized. It doesn't make any good for the trains that we built in Wisconsin to be stored or to be kept without passengers riding them," said Antonio Perez, CEO and president of Talgo USA.

Lagos State, Nigeria is buying the trains for its red line. It'll be the first operational metro system in West Africa. The area currently has heavy traffic congestion with limited rail transport. Lagos is one of the largest cities in Africa.

His Excellency Babajide Sanwo-Ol, the governor of Lagos State, said he hopes the deal is the "beginning of a mutually beneficial business relationship."

"It's all about providing jobs, jobs, jobs for our people and that's what we're doing. It's about ensuring that we can build our economy. It's that our people can move from one location to another," he said.

So why have these trains been storage for a decade? Politics.

In 2009, former Gov. Jim Doyle announced the state would buy two Talgo trains to use for the high-speed rail to connect Madison and Milwaukee. But when former Gov. Scott Walker took office, he blocked the deal, which set off a court battle with the company.

"While I'm happy about (the deal) today, I am a little disappointed in a sense that these trains are not in service in our state. I think that our previous governor unfortunately made a mistake in turning these trains away," Johnson said.

But city leaders say these trains will forever mark a partnership across continents. The trains are striped in Badger red.

"One state's loss is another state's gain," Johnson said.

The governor of Lagos State expects operation of the first phase of the Red Line to begin by the last quarter of 2022 with a capacity of 500,000 passengers daily.

"We're proud of the products that are produced here, proud of the Milwaukee workers who are employed here, and we're very proud of the trains that are here in this facility, as well. When they arrive in service in Lagos, I hope that you'll think about Milwaukee," Johnson said.
Lagos News Desk Nigeria United States