Governor To pardon Plessy, Of ‘Separate But Equal’ Ruling 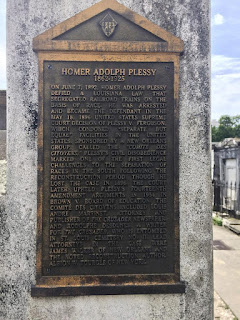 FILE - This June 3, 2018 photo shows a marker on the burial site for Homer Plessy at St. Louis No. 1 Cemetery in New Orleans. Homer Plessy, the namesake of the U.S. Supreme Court’s 1896 “separate but equal” ruling, is being considered for a posthumous pardon. The Creole man of color died with a conviction still on his record for refusing to leave a whites-only train car in New Orleans in 1892. (AP Photo/Beth J. Harpaz, File)
BY JANET MCCONNAUGHEY

The Plessy v Ferguson case went to the U.S. Supreme Court, which ushered in a half-century of laws calling for “separate but equal” accommodations that kept Black people in segregated schools, housing, theaters and other venues.

Gov. John Bel Edwards scheduled the pardon ceremony for a spot near where Plessy was arrested in 1892 for breaking a Louisiana law requiring Black people to ride in cars that the law described as “equal but separate” from those for white customers. The date is close to the 125th anniversary of Plessy’s guilty plea in New Orleans.

Relatives of both Plessy and the judge who convicted him were expected to attend.

It spotlights New Orleans as the cradle of the civil rights movement, said Keith Plessy, whose great-great-grandfather was Plessy’s cousin — Homer Plessy had no children.

“Hopefully, this will give some relief to generations who have suffered under discriminatory laws,” said Phoebe Ferguson, the judge’s great-great-granddaughter.

The state Board of Pardons recommended the pardon on Nov. 12 for Plessy, who was a 30-year-old shoemaker when he boarded the train car as a member of a small civil rights group hoping to overturn the law.

Instead, the 1896 ruling solidified whites-only spaces in public accommodations until a later Supreme Court unanimously overturned it in Brown v Board of Education in 1954. Both cases argued that segregation laws violated the 14th Amendment’s right to equal protection.