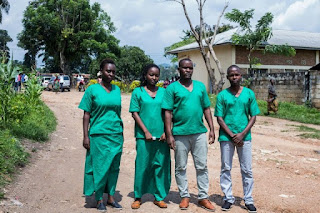 The journalists were working for Iwacu, one of Burundi's few independent media outlets when they were arrested on October 22 and charged with endangering state security.

"We are in shock. The court has just sentenced the four Iwacu journalists to two-and-a-half years in prison and fined them one million Burundi francs (485 euros, $535)," a witness who was in court told AFP.

"It's a shame because they were simply doing their job."

The prosecution had called for a 15-year prison sentence largely based on a WhatsApp exchange of messages between one of the reporters and a colleague based abroad in which the former wrote: "We are heading for Bubanza ... to help the rebels."

A further demand was for the four to be denied their civic rights for 20 years.

Iwacu's founder, Antoine Kaburahe, who lives in exile in Belgium, tweeted that the organisation would appeal the sentence.

Police say at least 14 rebels from the Burundian RED-Tabara group, based across the border in eastern DR Congo, were killed in an attack the day the journalists were arrested.

The rebels say they killed a dozen security personnel.

"The authorities must quash the conviction and sentences, and the four journalists must be immediately and unconditionally released," he said.

Magango underscored that journalists should be allowed to work freely "particularly ahead of upcoming elections" in May.

The Reporters Without Borders NGO, which places Burundi a lowly 159th on its global list of press freedom, says those detained were simply doing their job.
AFP Africa Journalism Newsroom