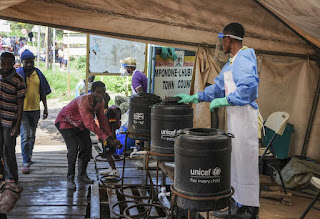 In this Friday, June 14, 2019 file photo, people coming from Congo wash their hands with chlorinated water to prevent the spread of Ebola infection, at the Mpondwe border crossing with Congo. Ugandan health authorities on Thursday, Aug. 29, 2019 said a 9-year-old Congolese child has tested positive for Ebola in Uganda, after being identified and screened at the official Mpondwe border crossing, and was then taken to an isolation unit in the Ugandan border town of Bwera in Kasese district. (AP Photo/Ronald Kabuubi, File)

KAMPALA, UGANDA (AP) — A 9-year-old Congolese girl tested positive for Ebola in Uganda on Thursday after traveling from Congo, where an outbreak of the highly infectious disease has killed nearly 2,000 people.

The child, who is now in isolation at a hospital in the Ugandan border district of Kasese, traveled from Congo with her mother on Wednesday, Uganda’s health ministry said in a statement.

The girl, who was bleeding through the mouth and had a high fever, was identified and screened for Ebola at an official border crossing. She was immediately isolated. Ugandan health officials said they believed she had no contacts to worry about.

The Ebola outbreak, which was declared a year ago in eastern Congo, hasn’t shown signs of slowing down despite new treatments and vaccines given to more than 197,000 people in the region. New cases emerged in Goma, the capital of North Kivu province, in recent months and have recently spread to a new province, South Kivu.

Insecurity has been one factor in a region where rebel groups have fought for control of mineral-rich lands for decades. Ebola also has spread because of mistrust by communities who have also staged attacks against health workers. Many people in eastern Congo don’t trust doctors and other medics.

But cases of cross-border contamination have been rare, in part because of stringent screening procedures at official border crossings in the neighboring countries of Uganda and Rwanda.

In June, a family of Congolese with some sick family members crossed into Uganda via a bush path.

Two of them later died of Ebola, and the others were transferred back to Congo.

There had been no confirmed case of Ebola in Uganda since then.
AP News Congo Ebola Uganda